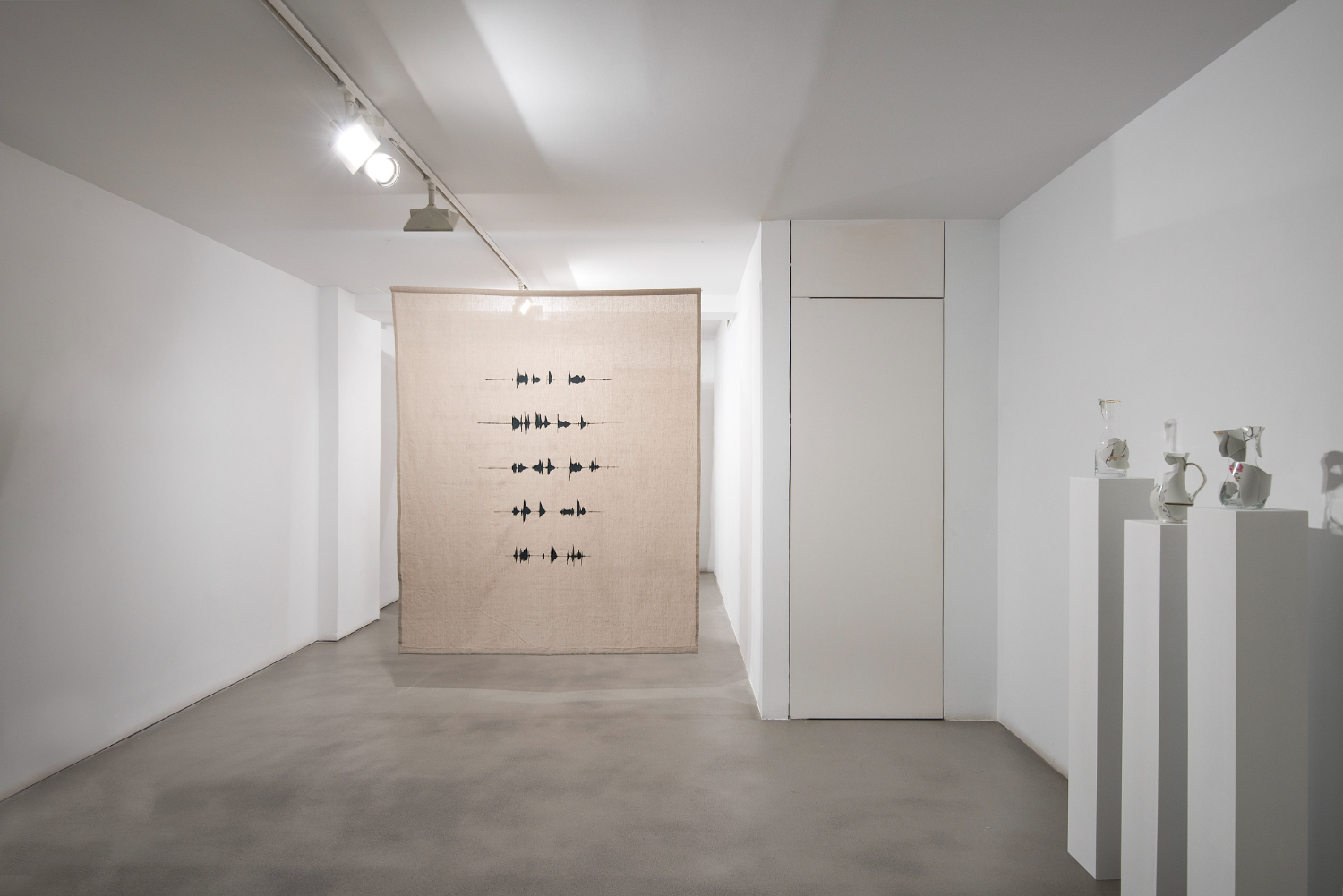 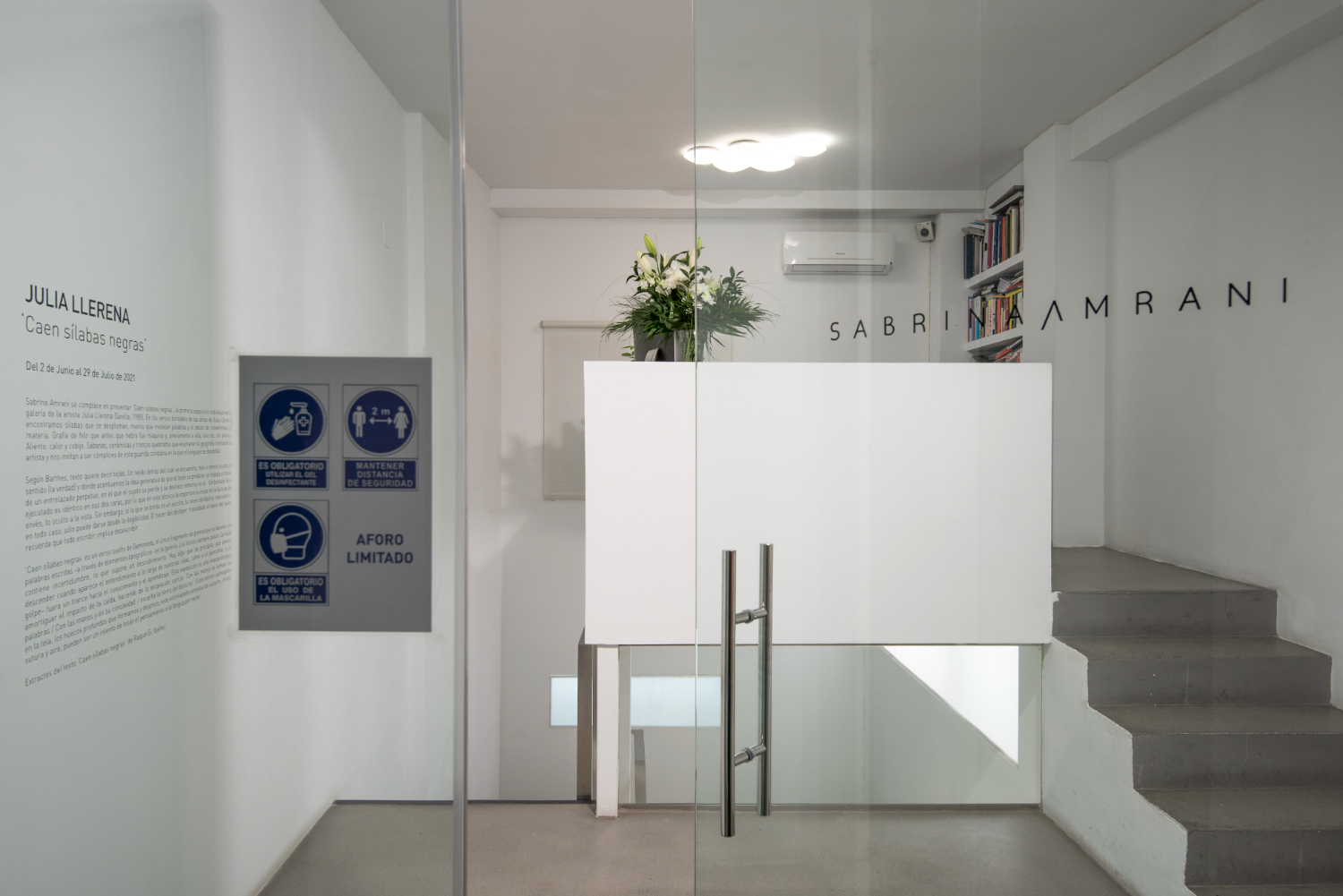 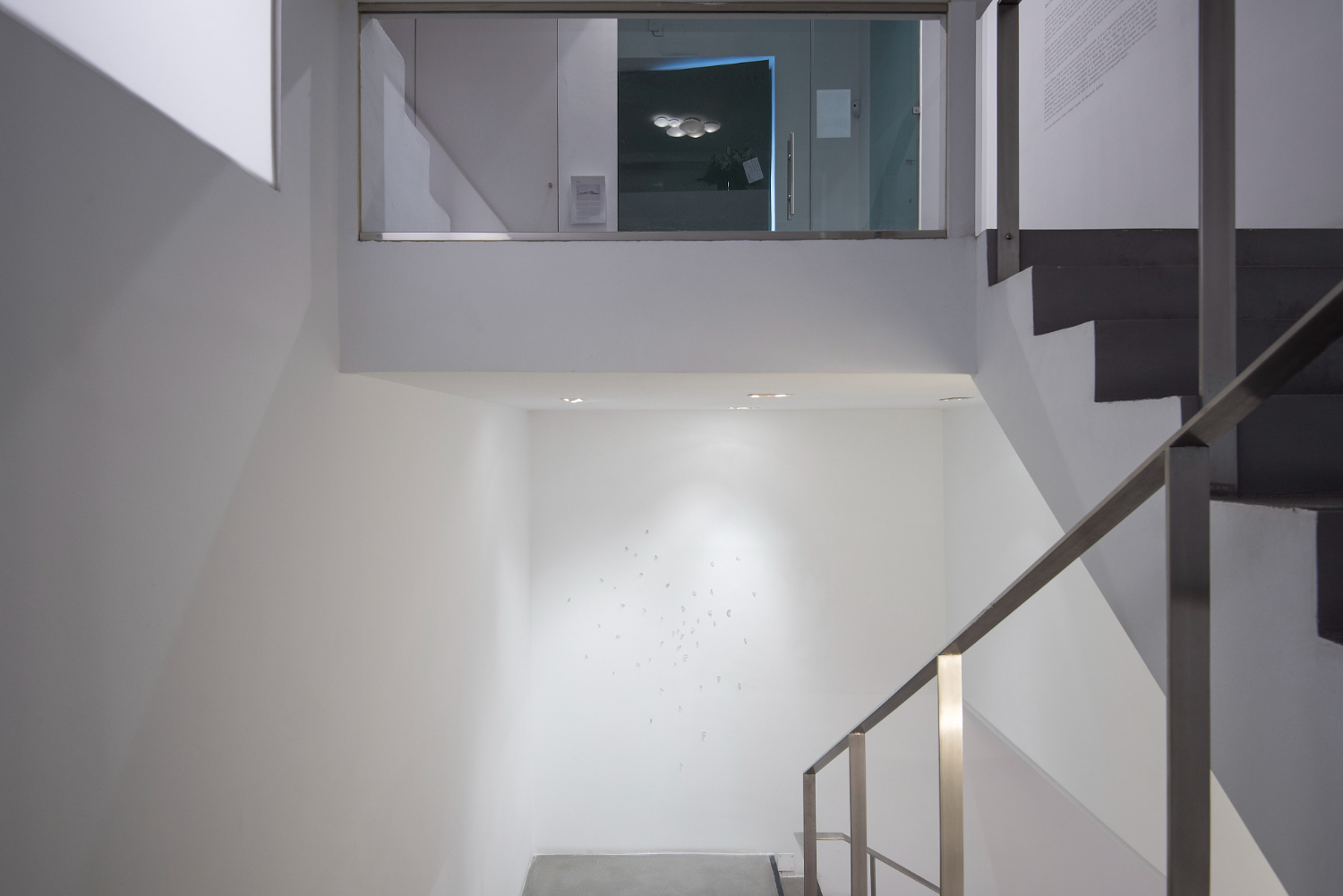 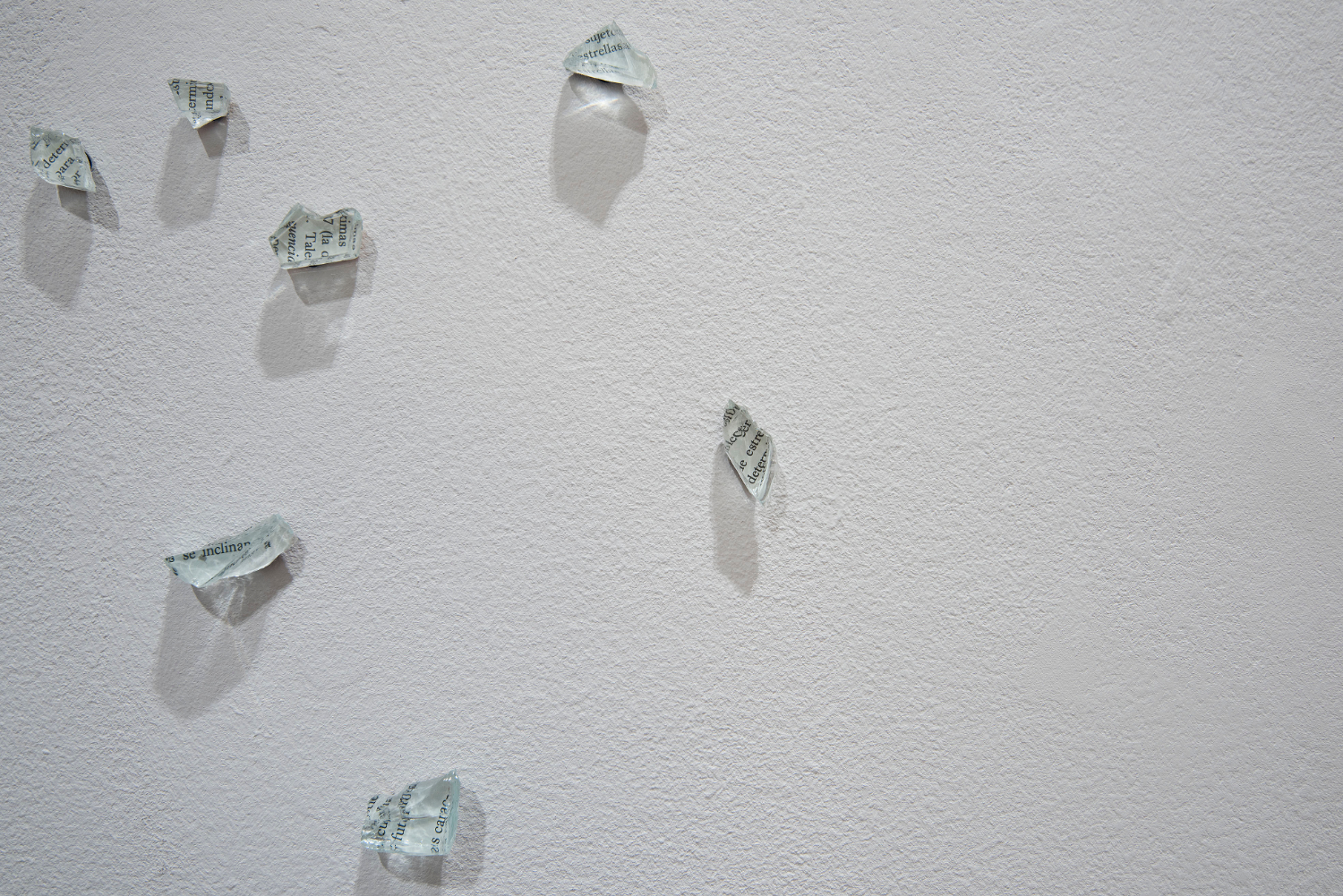 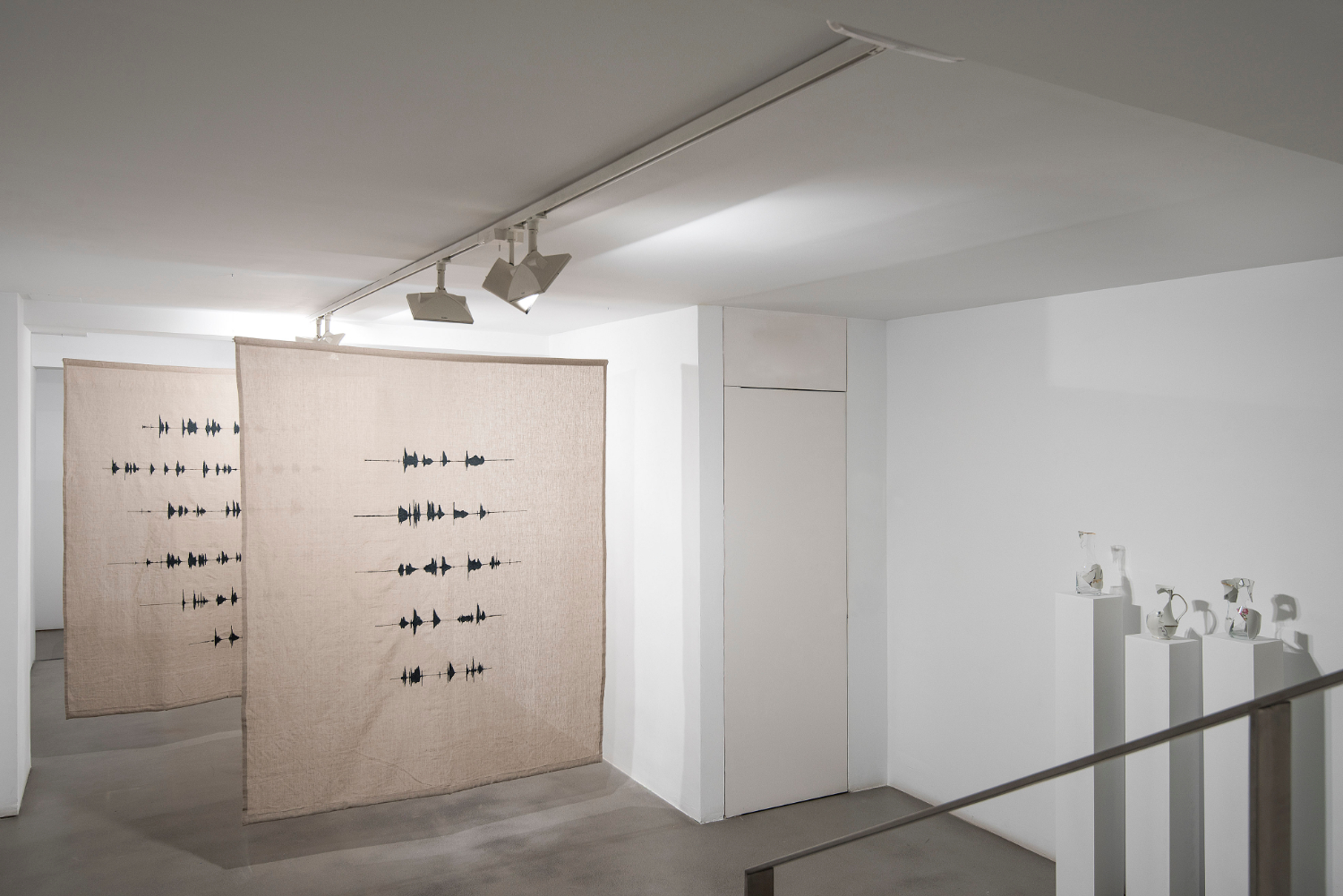 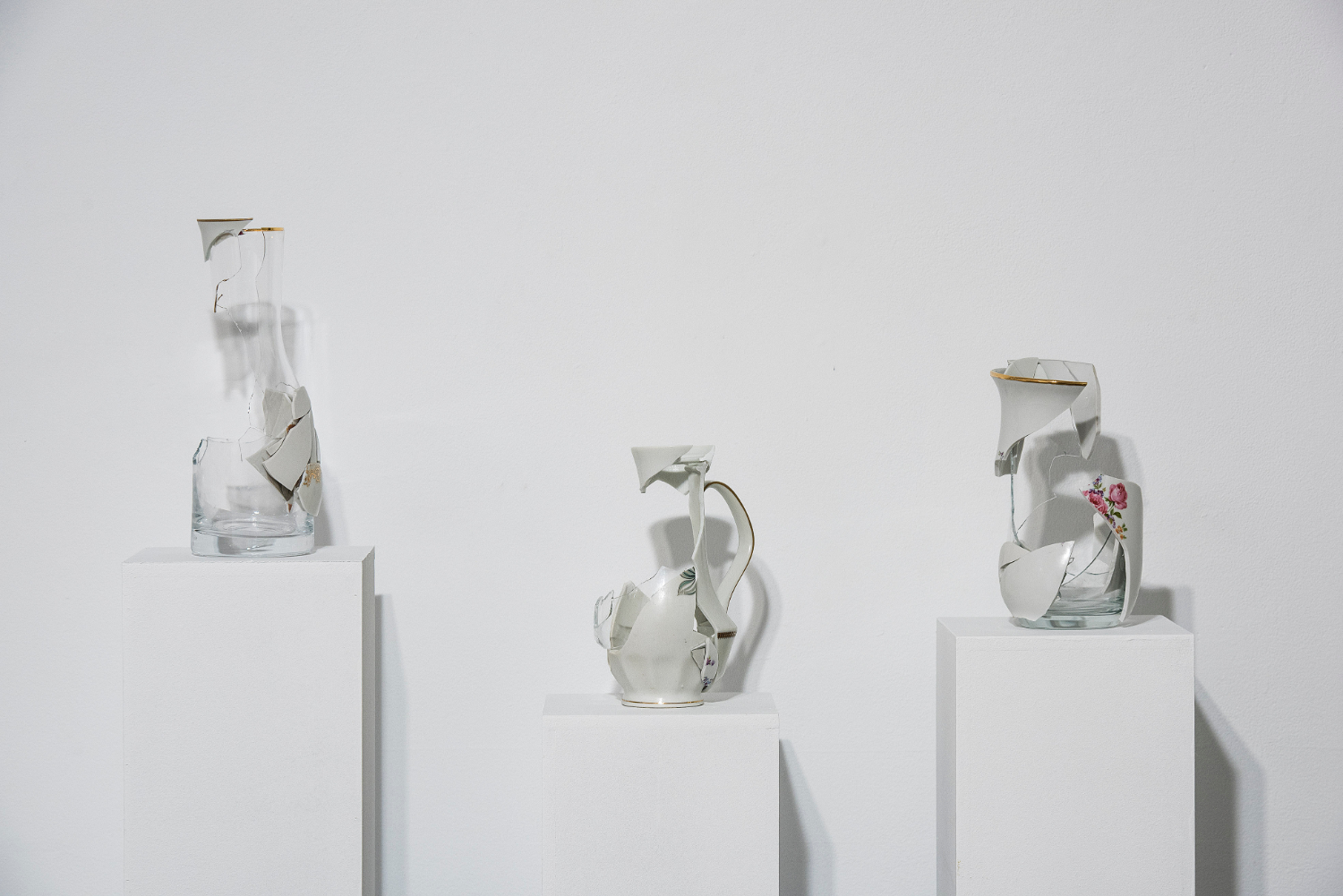 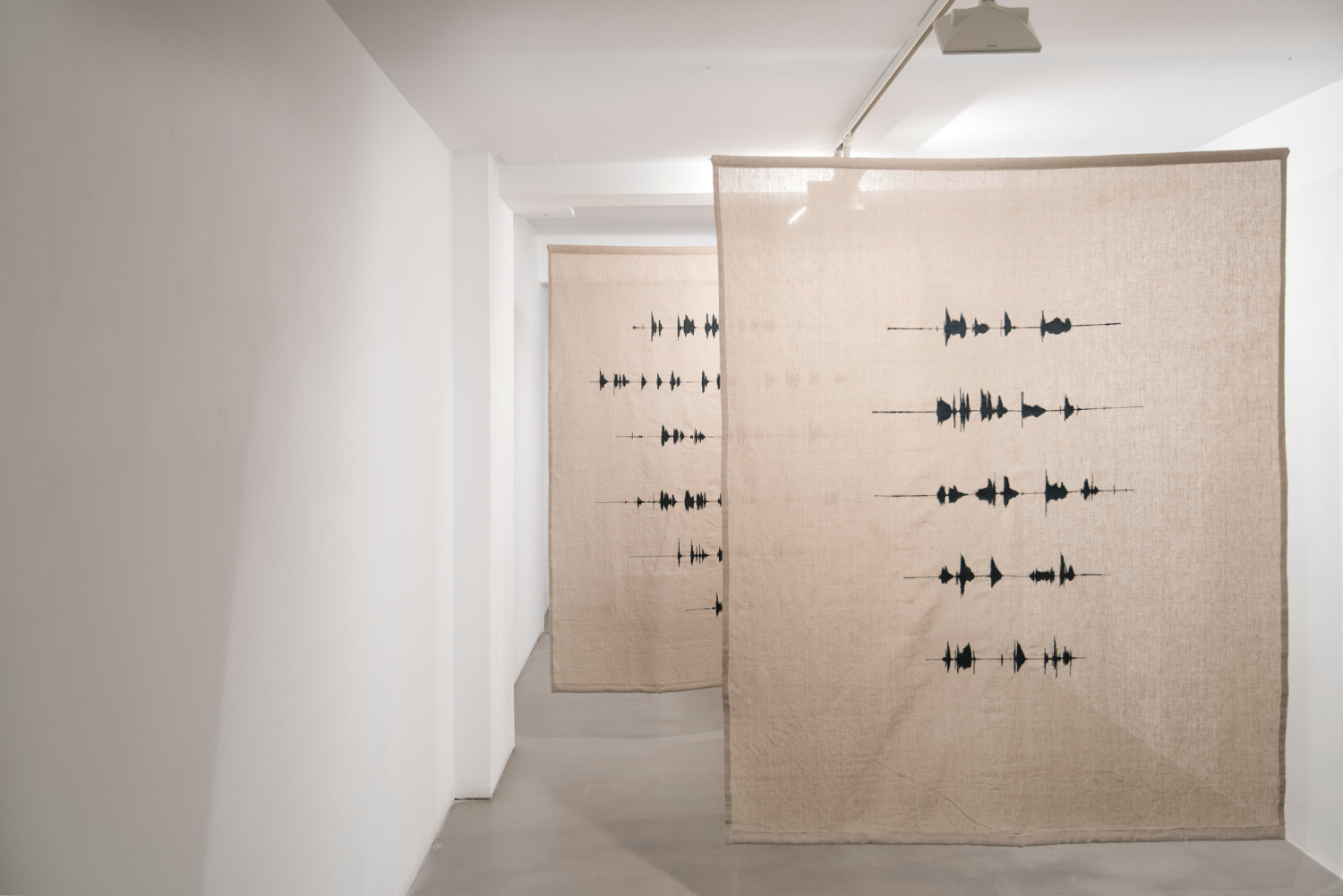 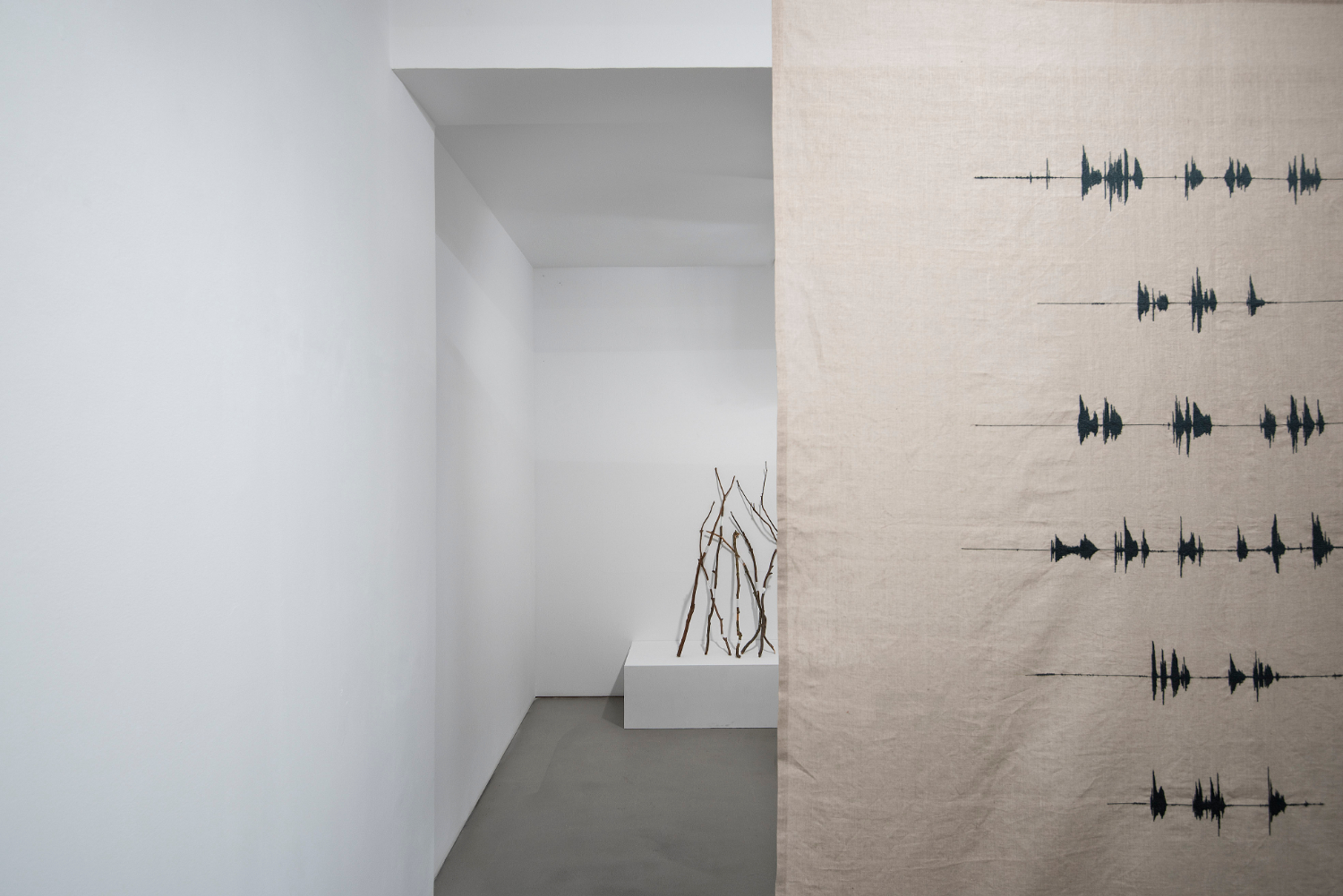 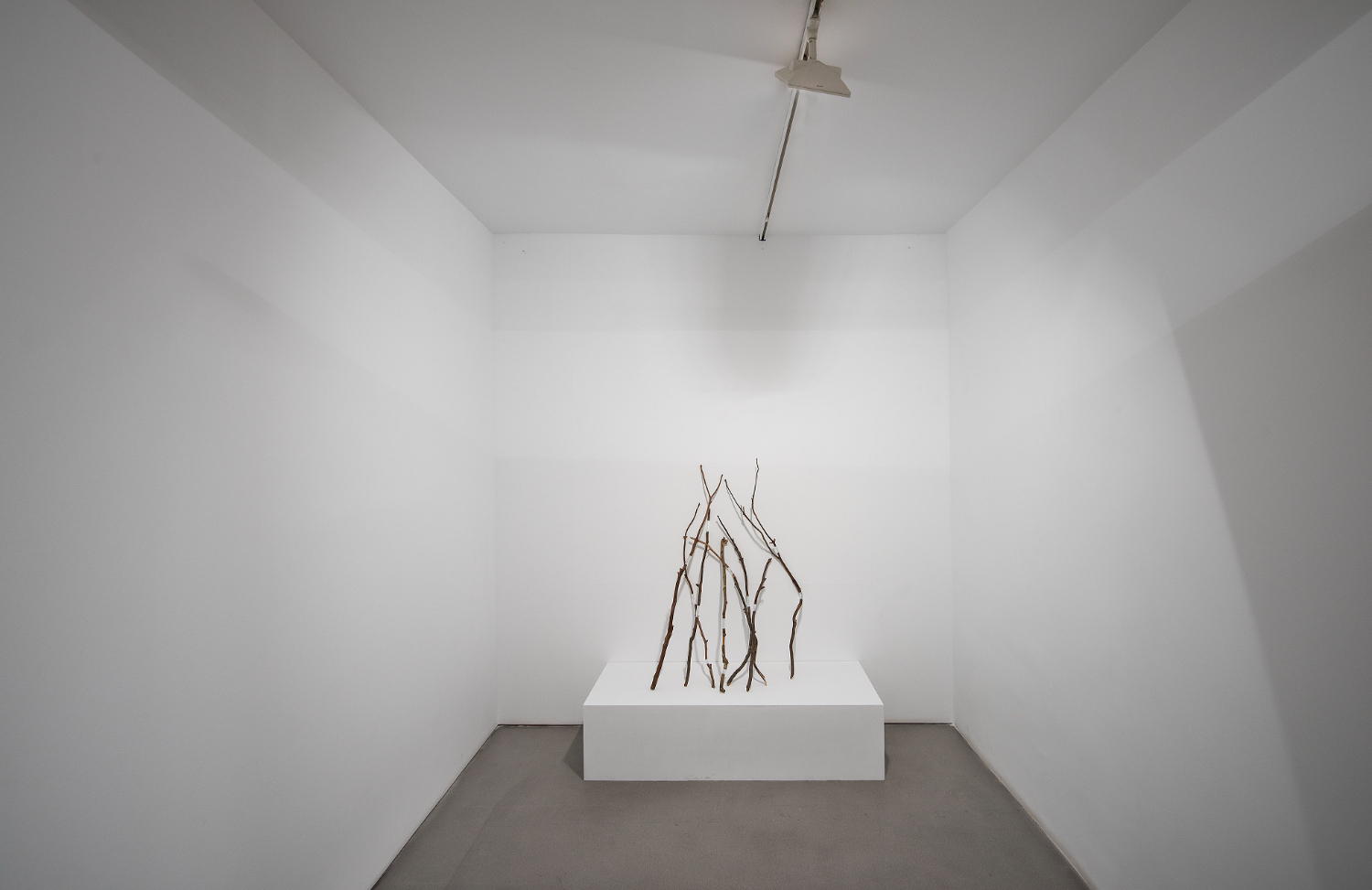 Sabrina Amrani is pleased to present ‘Caen sílabas negras’, the first solo show in the gallery by the artist Julia Llerena (Sevilla, 1985).

Some time ago, I came across a collection of poems in which I found the following statement: you can make a poem out of anything1. In the embroidered verses of Julia Llerena's works we find plummeting syllables, hands modeling words and the desire to turn them into matter. Gliph of thread that before being thread was machine and, prior to it, a voice, a breath. Breath: warmth and shelter. Sheets, ceramics and broken logs that enumerate the intimate geography of the artist and invite us to be accomplices of this day-to-day lair in which language unfolds.

According to Barthes, text means weave. A weave behind which the meaning (the truth) is found, more or less hidden, and where we accentuate the generative idea that the text is produced, it is worked through a perpetual interlacing, in which the subject is lost and undone immersed in it[2]. A well-executed embroidery is identical on both of its sides, so in this technique the importance falls on the finish on the back, what is hidden from view. However, if what is embroidered is a writing, reversibility is impossible or, in any case, it can only occur from illegibility. The doing of the unweaving, transferred to the making of the text, recalls that all writing implies un-writing[3]. The three large pieces that we find in the room do not hide the punctured back of the canvas; they rather invite in their meandering arrangement to a bodily reading of the verses - now adulterated echoes - contained in the backing. A journey in which the alleged intelligibility of the hidden face does not influence because everything is shown; there is no orthodox character or symbol, nor (in)correct reading order. The artist's action, then, is not circumscribed in a merely additive progression; undoing what is done is part of the narrative that is built between the warp and the weft, on which an imprint remains; hole and trace of thread or ink, phantasmagoria of the blank sheet. In these works, the embroidered verses on linen are not configured as a mere handwriting artifact, nor is there a concern to offer any translation: there is a pulse to repress the text as such, addressing the poetic gesture as the action of decoding and rewriting the literal inscription of the words. The poetic trespasses the appearance and becomes material fact that occupies the mouth and throat, overflowing the exclusivity of the page[4].  The poem is born in the breath, a harmony linked between the babbling, the murmur and the verb. The phonemic is manipulated in a simultaneous exercise of fragmentation and condensation through electronic intervention. Using the spectrometer, the verses are turned into failed calligrams, fleshy topographies that capture the tactile and granular intensities of the poems selected by the artist.

A spectrogram is the graphic representation of sound frequencies, even those imperceptible to the human ear. The origin of the term has an ambivalence that transports us to what emerges and is perceptible through the eye and, also, to what is invisible to it; to an elusive, ghostly presence. In these pieces, the use of the spectrogram is not enunciated as a technical fetish, but rather from Julia's interest in deploying the evocative potentiality of absence; the voids that she tends to introduce in a large part of her production, both installative and sculptural. Spirits and memory. Here appears, the vision in the room of some wooden branches, whose rhythm is interrupted by cavities filled with glass; or porcelain vases supported by pieces of clear glass. There is no desire for restitution, nor repair in the holes that go through the works. The operation is simple: to displace the antagonism between the hollowness and the abundance, directing the value towards the fragility that sustains the fragments that make up a whole. Life happens in the interstices. Nothingness is not a crude absence, but the infinite fullness of openness. The hollow is where the void rests and, in turn, excavation. Imitating the methodology of the poems embroidered on linen, I proceed to use the voices of other authors, thus summoning the poet Heather Christle and Didi-Huberman. The first, affirms that writing poems is not very different from drilling a hole that others have previously made[5]; the second indicates that sculpting is like excavating the earth. In both cases, artistic practice involves rolling up your sleeves: the search requires entering the hole, the void, as an exercise in non-linear anamnesis. To unearth is to extract a treasure, a vestige, a corpse; but it also consists of preparing the land, tilling it into new forms that contain in themselves the becoming of memory, projecting it towards future growth[6].

Caen sílabas negras is a loose verse by Gamoneda, the only poem fragment that is revealed with written words –through typographic elements– in the gallery. Titles always have weigh. The fall contains uncertainty, which entails a discovery. There is something that precipitates, that seems to descend when understanding appears throughout our lives, as if the collapse - and its blow - were a trance towards knowledge and learning. This exhibition is an invocation to muffle the impact of the fall, making the excavation a caress: With the hands the words are formed / With the hands and in its concavity[7] / digs the earth of the speech[8]. These verses immersed in the cloth, the deep holes that we form and leave; this perpetual intertwining of whisper, crystal, suture and air, may be an attempt to touch the thought or the unborn tongue.