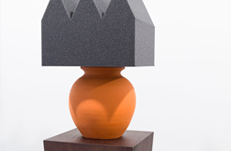 Babak Golkar is a Canadian artist, working and living in Vancouver, Canada. Born in Berkeley, US, 1977.

He spent most of his formative years in Tehran until 1996 when he moved to Canada. He obtained a Masters of Fine Arts from the University of British Columbia in 2006 and has exhibited in venues internationally since graduating. Selected solo exhibitions and presentations include All The Blind Men. Servais Family Collection, Brussels, Belgium (2019), The Exchange Project (La Collection Imaginaire), INCA, Seattle, U.S.A. (2016); Of Labour, Of Dirt, Sazmanab, Tehran, Iran (2014); Time To Let Go…, Vancouver Art Gallery: Offsite, Vancouver, Canada (2014); Dialectic of Failure, West Vancouver Museum, West Vancouver, Canada (2013); Parergon, Sharjah Contemporary Art Museum, Sharjah, U.A.E. (2012) and Mechanisms of Distortion, Victoria and Albert Museum, London, U.K. (2012).

Through a variety of forms - including drawing, print, ceramics, sculpture and installation - Babak Golkar’s subjects of research have emerged from his interest in spatial analysis in relation to contemporary human conditions. Golkar has generated a practice steeped in the juxtaposition of disparate traditions and by extension, new forms and meanings emerge from re-contextualization.

A driving force behind recent projects has been a contention of perspective. Skewing the asserted certainty of perspective and questioning its formal grounds for reference, as well as subsequent ideological viewpoints, Golkar engages a critical inquiry into cultural and socio-economic systems. Exploring the physical position of the body in relationship to form, physical points of reference and spacial relationships, Golkar subsequently echoes social, cultural, political states of mind in his work.

2007     Then, Now and Then. Republic Gallery. Vancouver, Canada. (Curated by Pantea Haghighi).

2003     The philosophy and science of mutation. Centre A Gallery. Vancouver, Canada, (Curated by Sadira Rodrigous).

2018.    Roadside Attractions - Made in Canada. (Curated by Jennifer Matotek) Dunlop Art Gallery and exhibited in Regina.

2011     The Bravery of Being Out of Range. Athr Gallery. Jeddah, Saudi Arabia. (Curated by Aya Haidar).

2008     Prequel. Gallery Atsui. Vancouver, Canada. (Curated by Wesley Cameron and Matt Robertson: Until We Have A Helicopter).

2012     Even the Stars Seem To Be Changing Their Position. Lyndl Hall and Erdem Taşdelen. Sanatorium Project. Istanbul, Turkey.

2014     Turner, Michael. How It Is Made and Waht It Is Made Of: Babak Golkar’s Scream Pots. (Catalogue Essay for Of Labour, Of Dirt).

2011     Nominated and shortlisted for The Victoria and Albert Museum’s Jameel Prize. London, U.K.