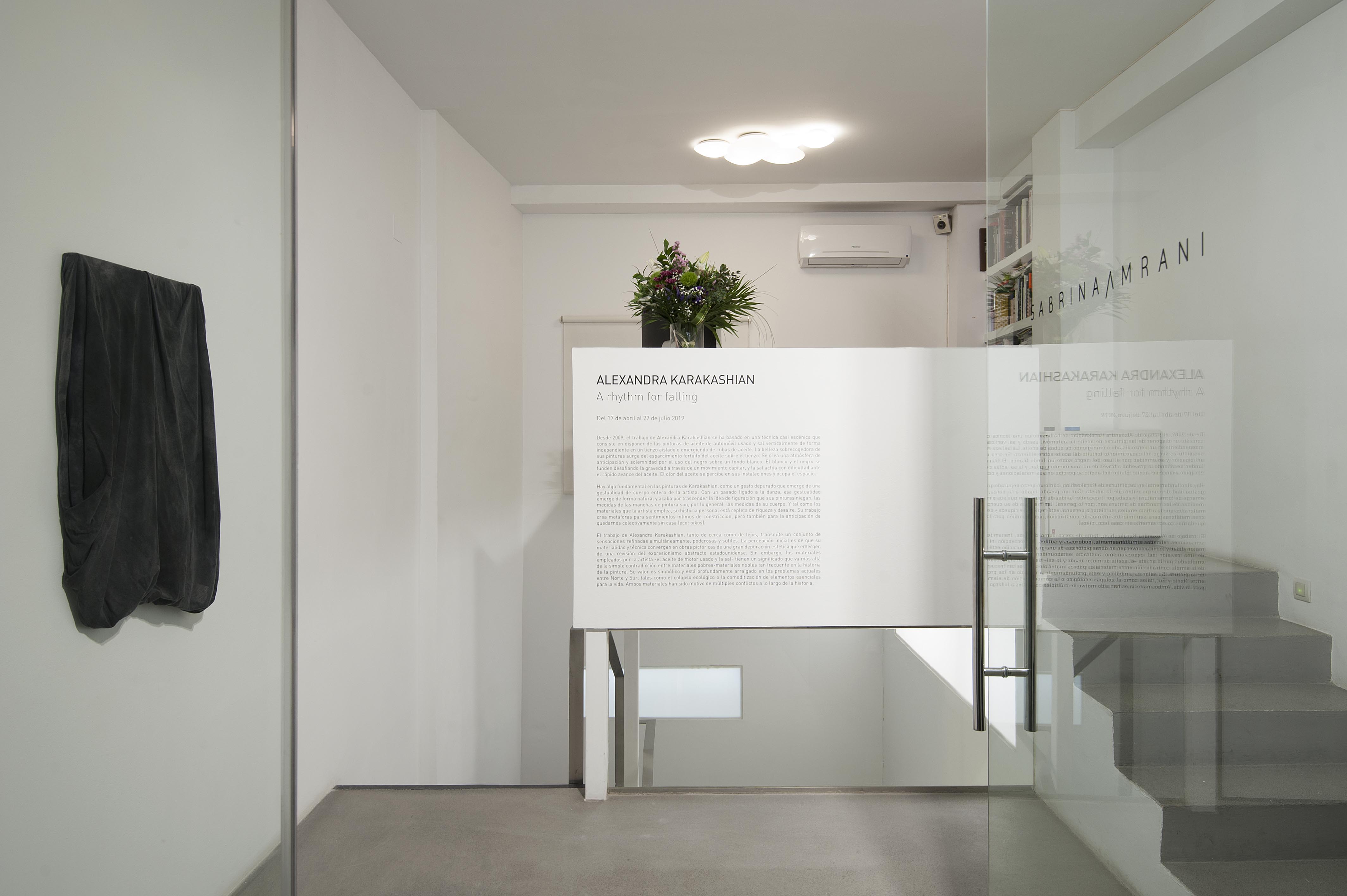 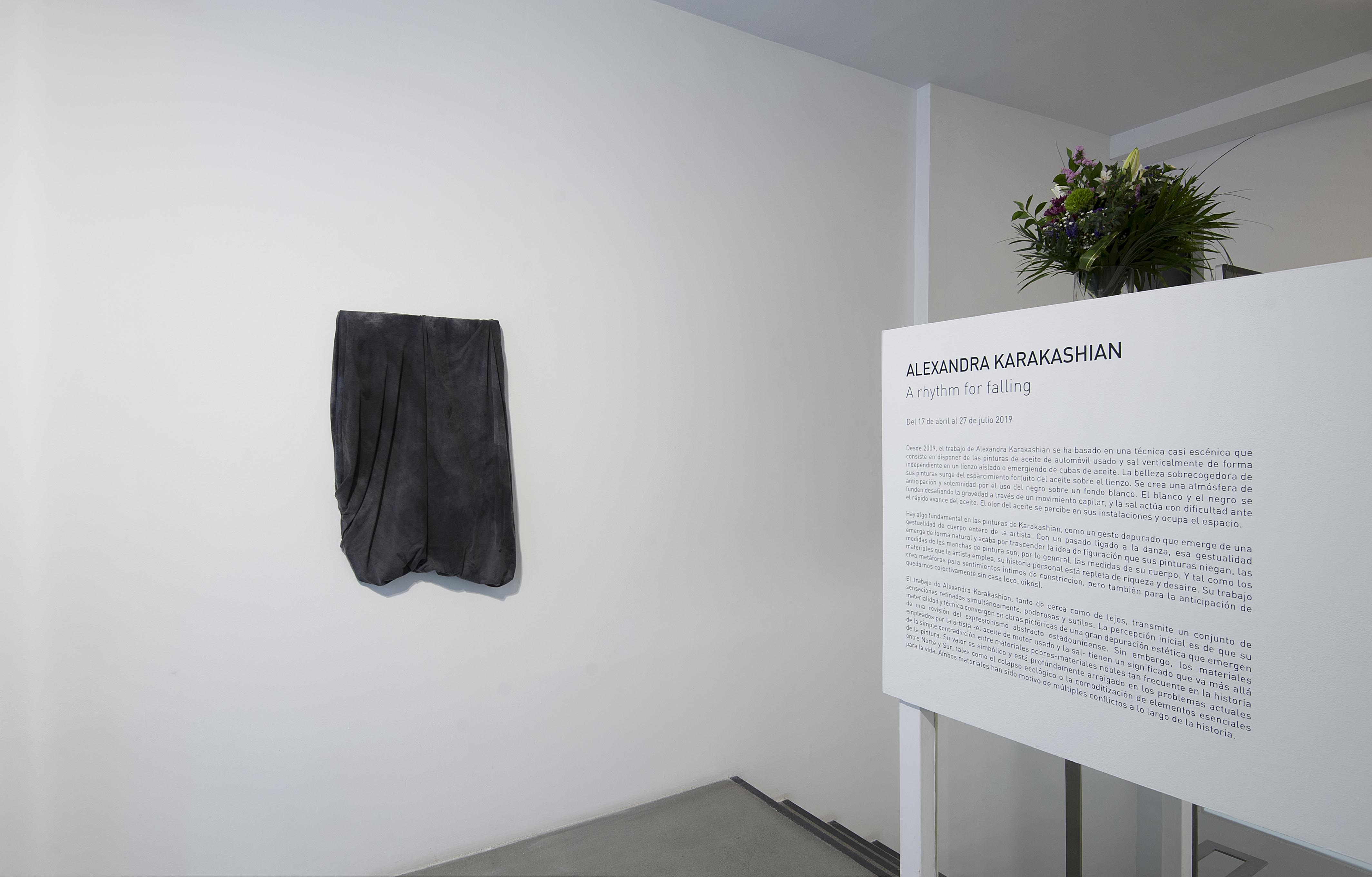 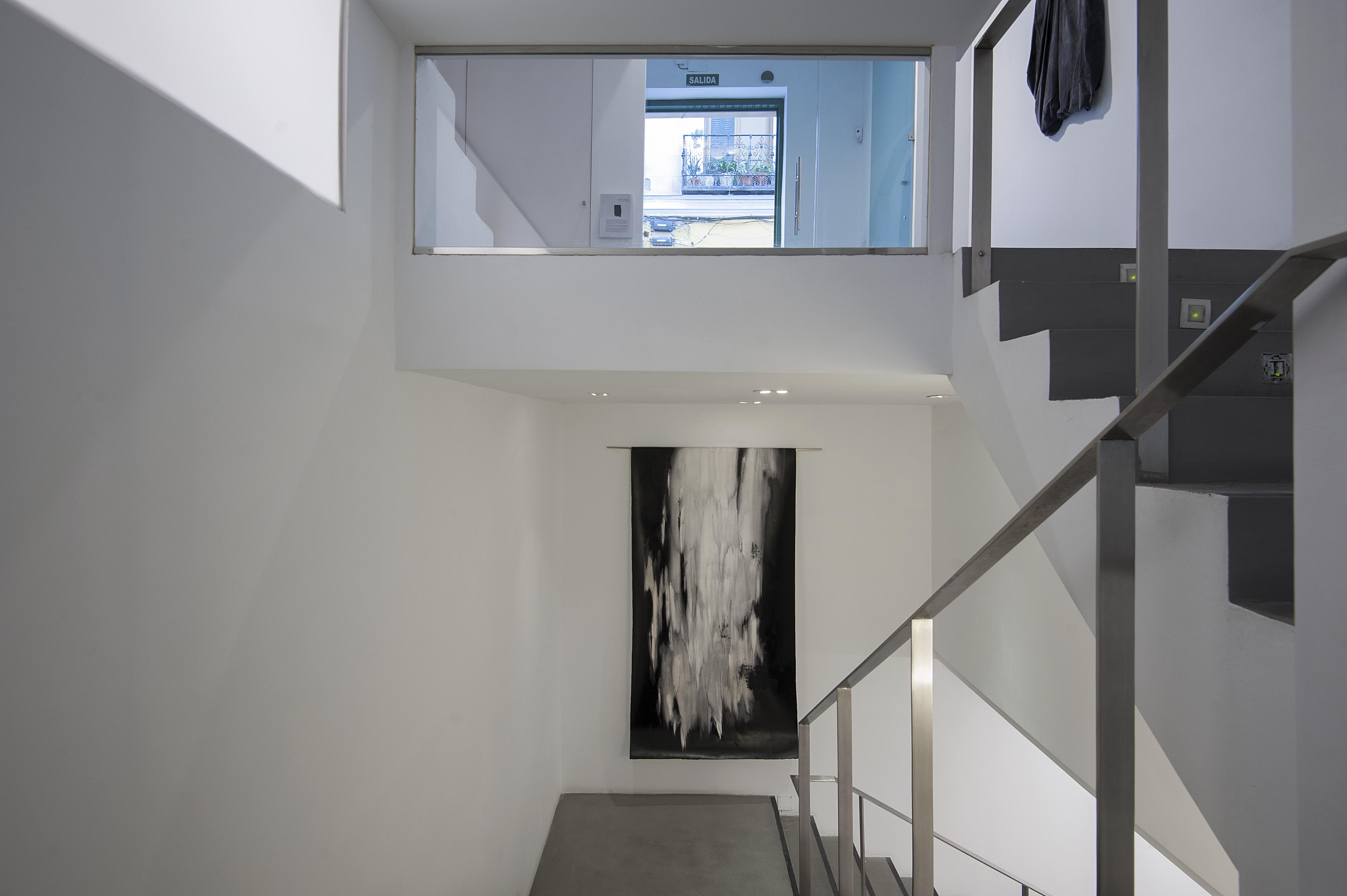 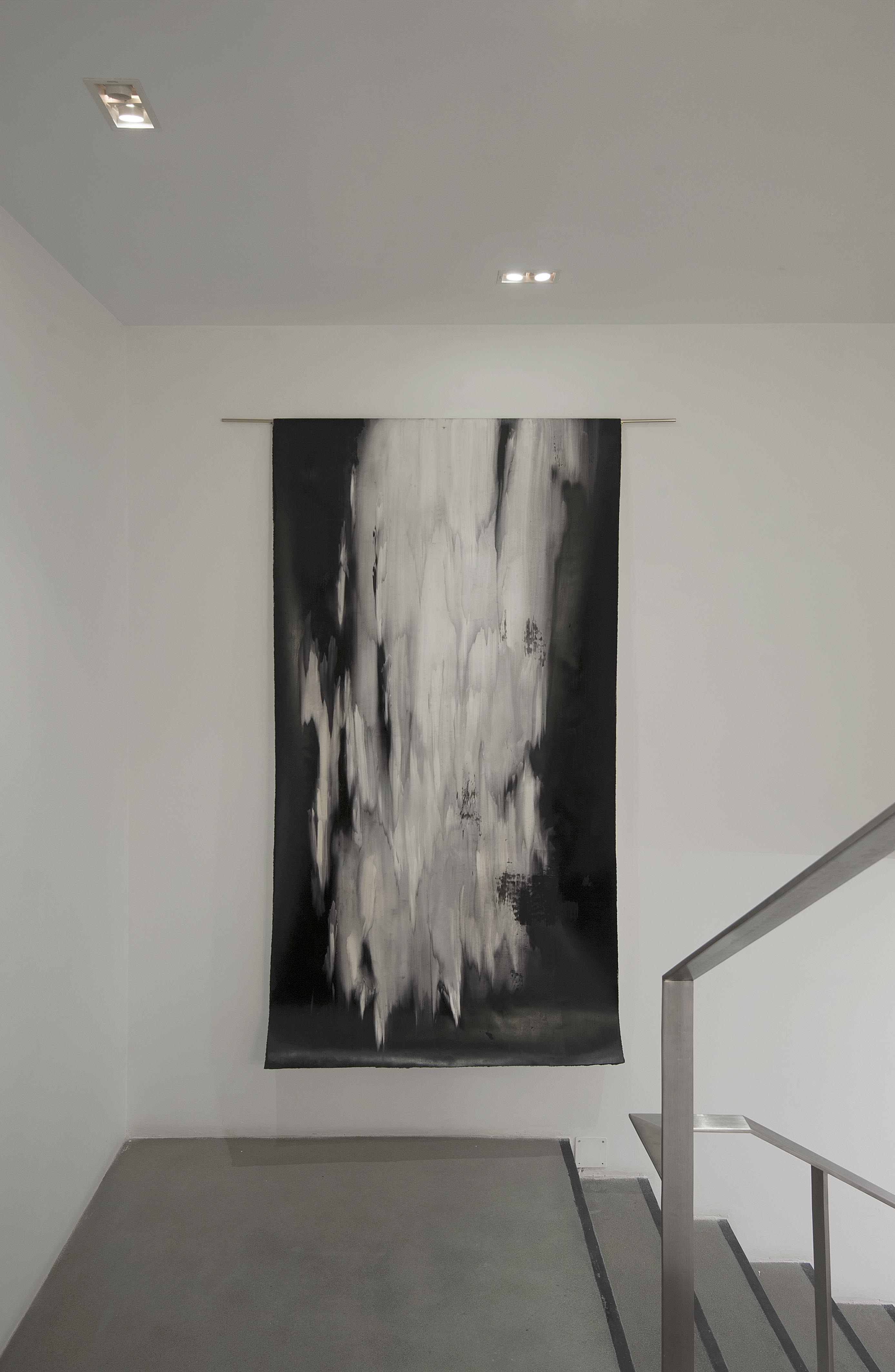 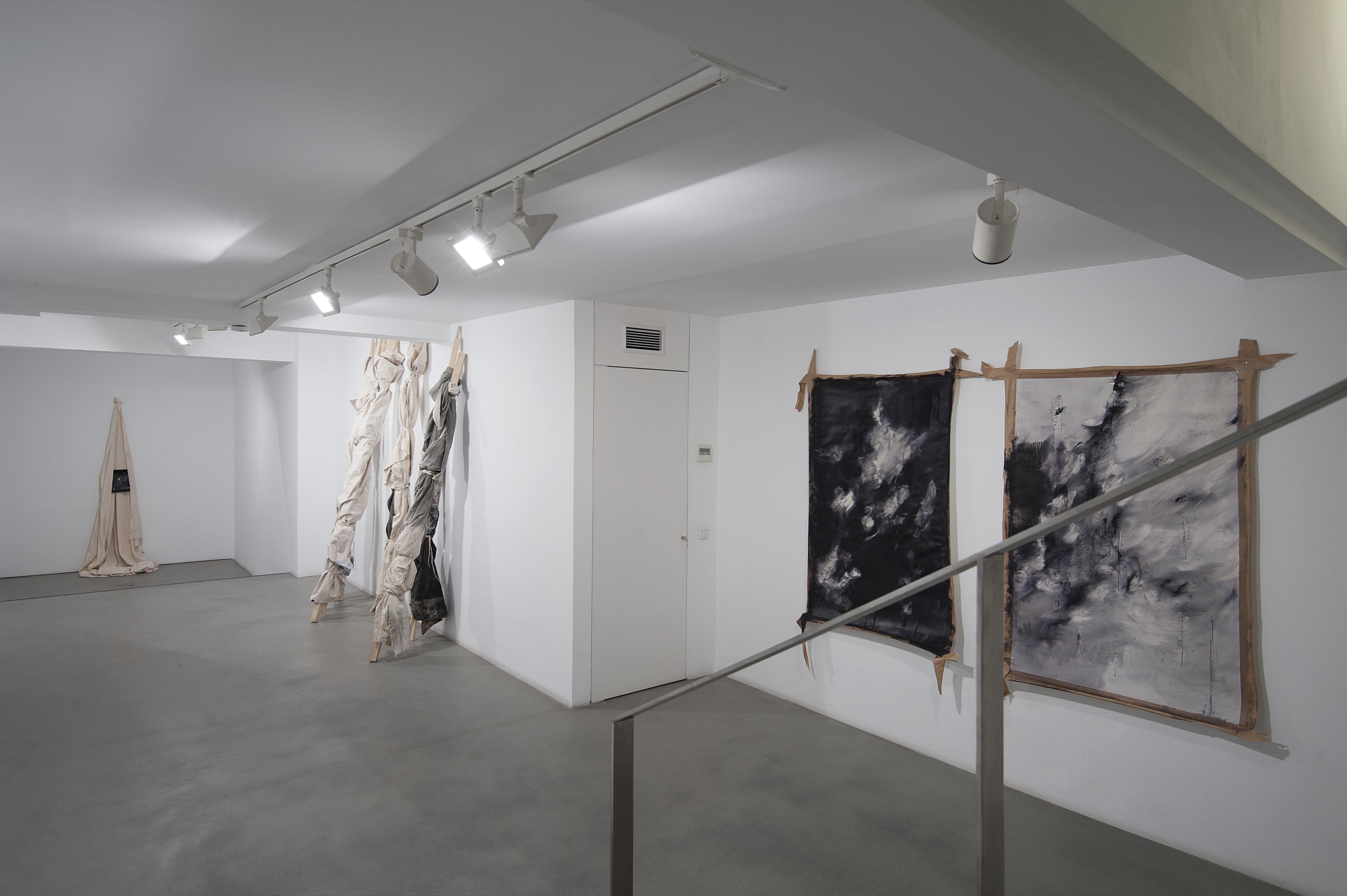 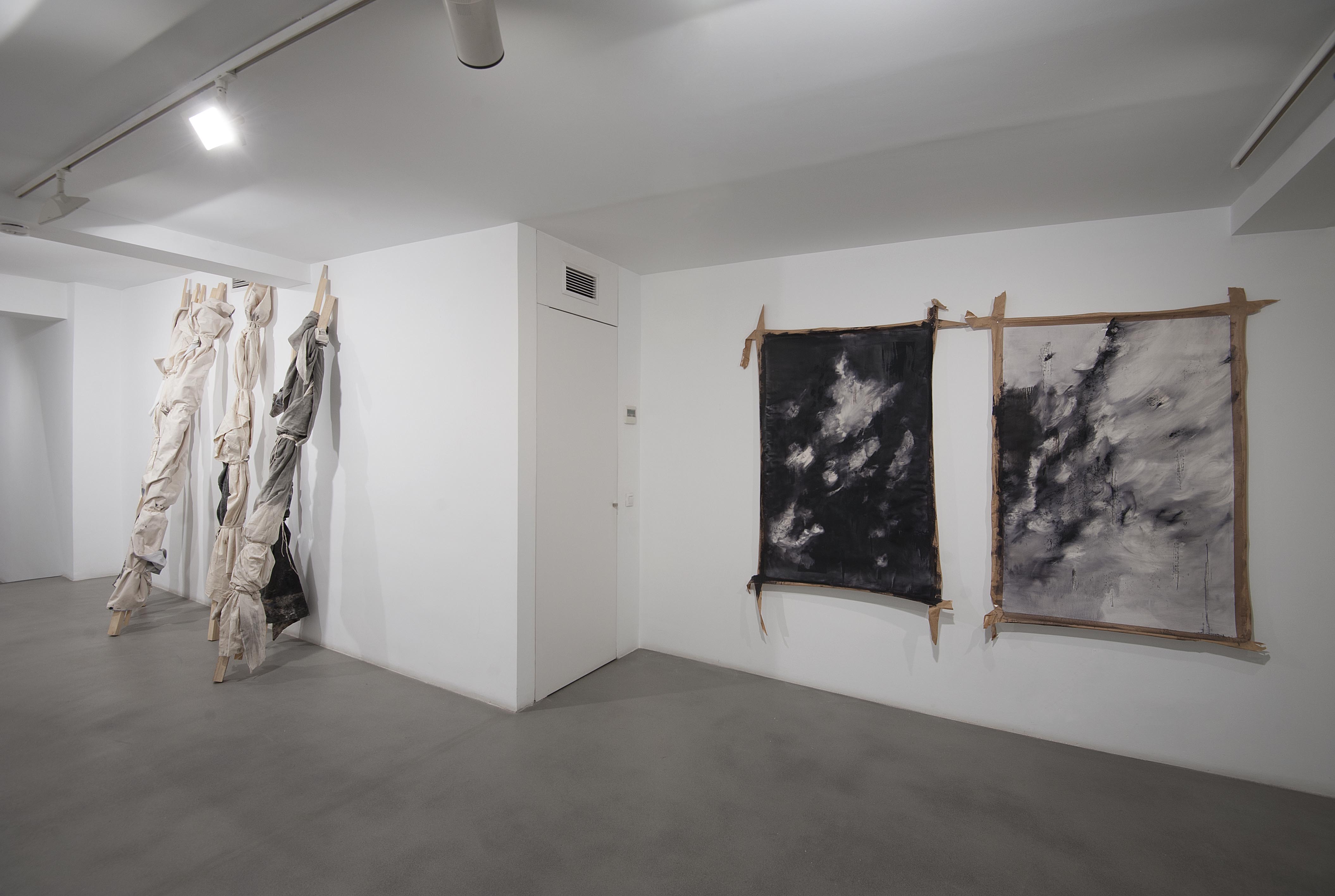 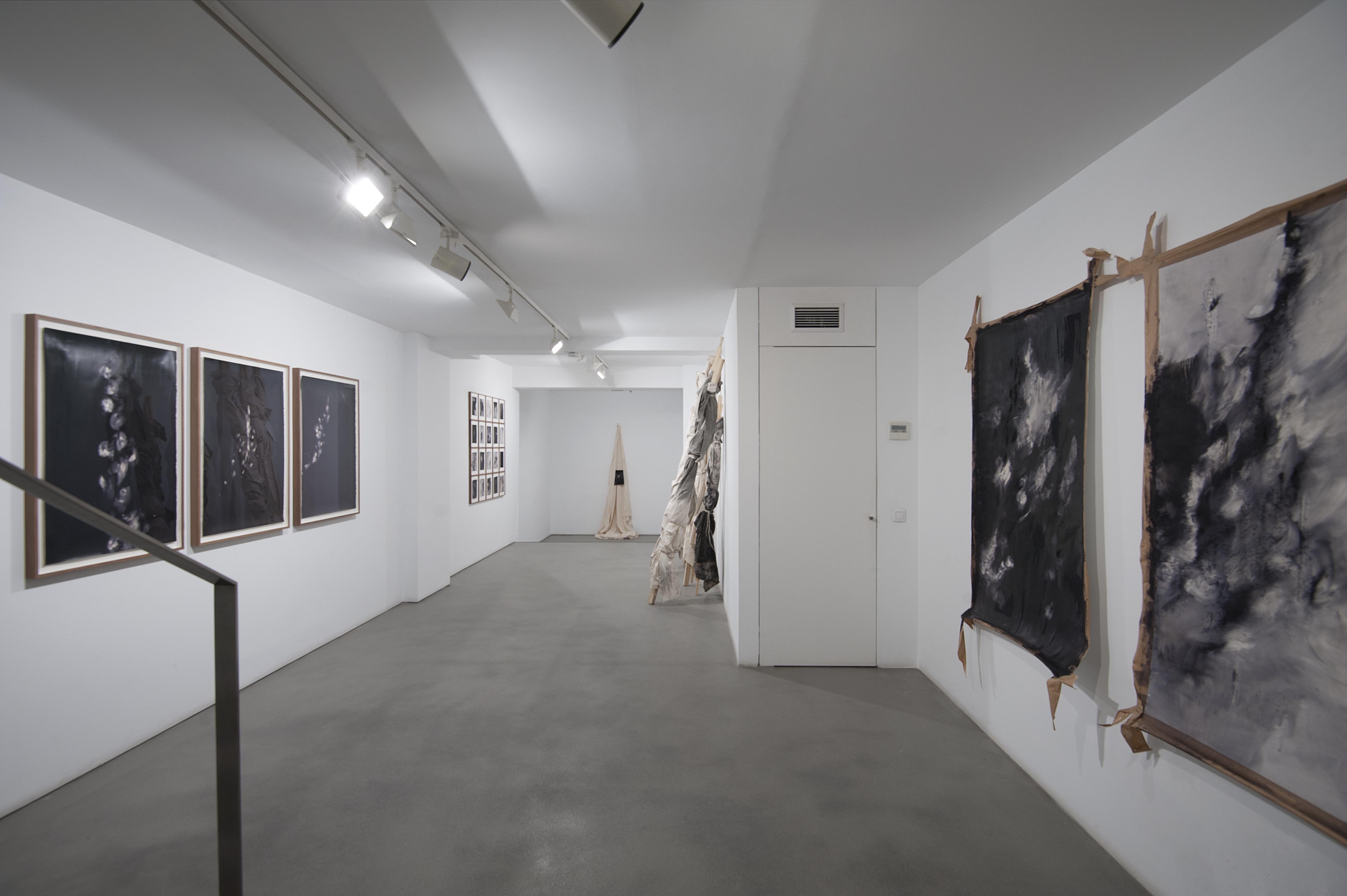 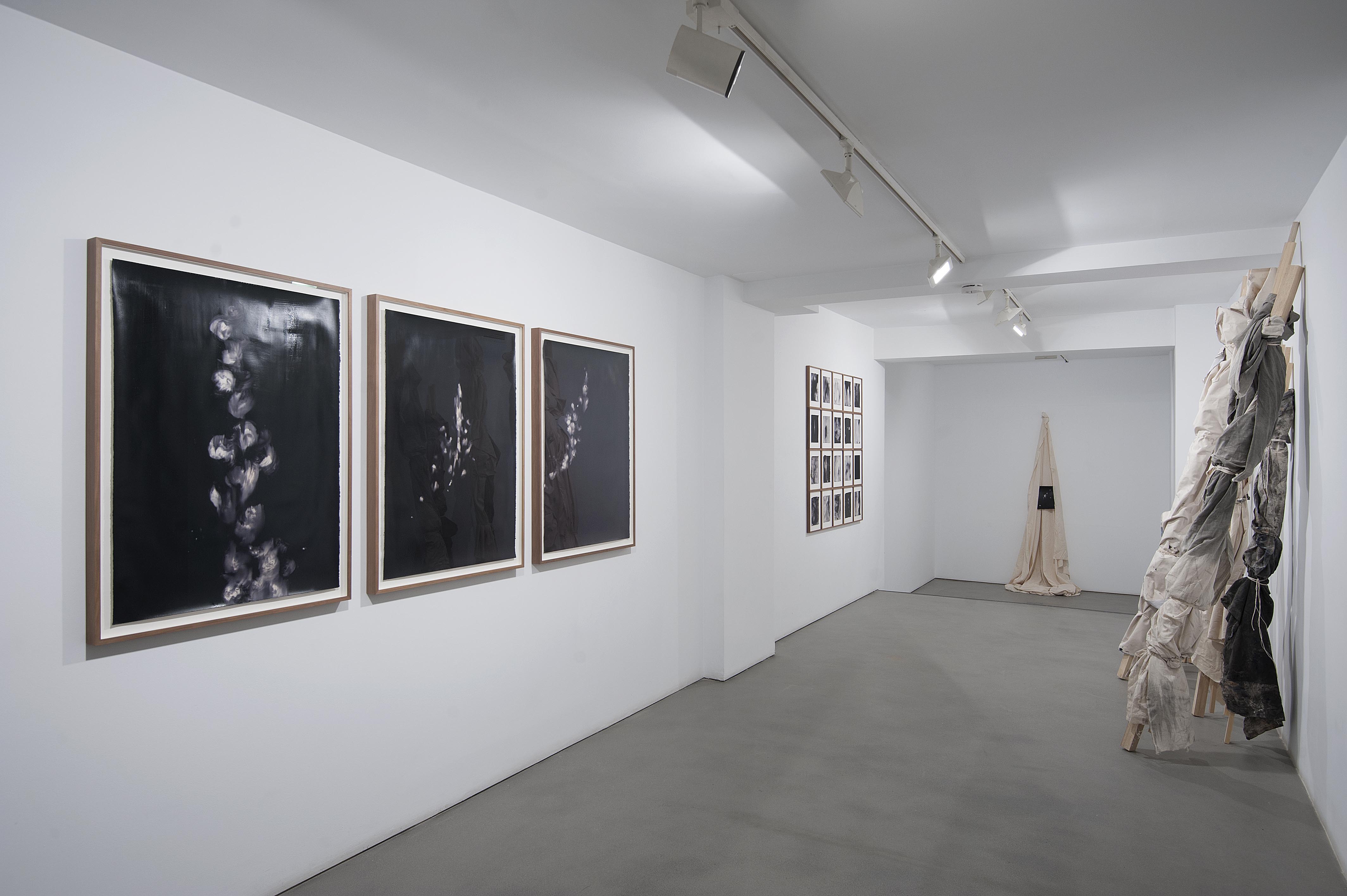 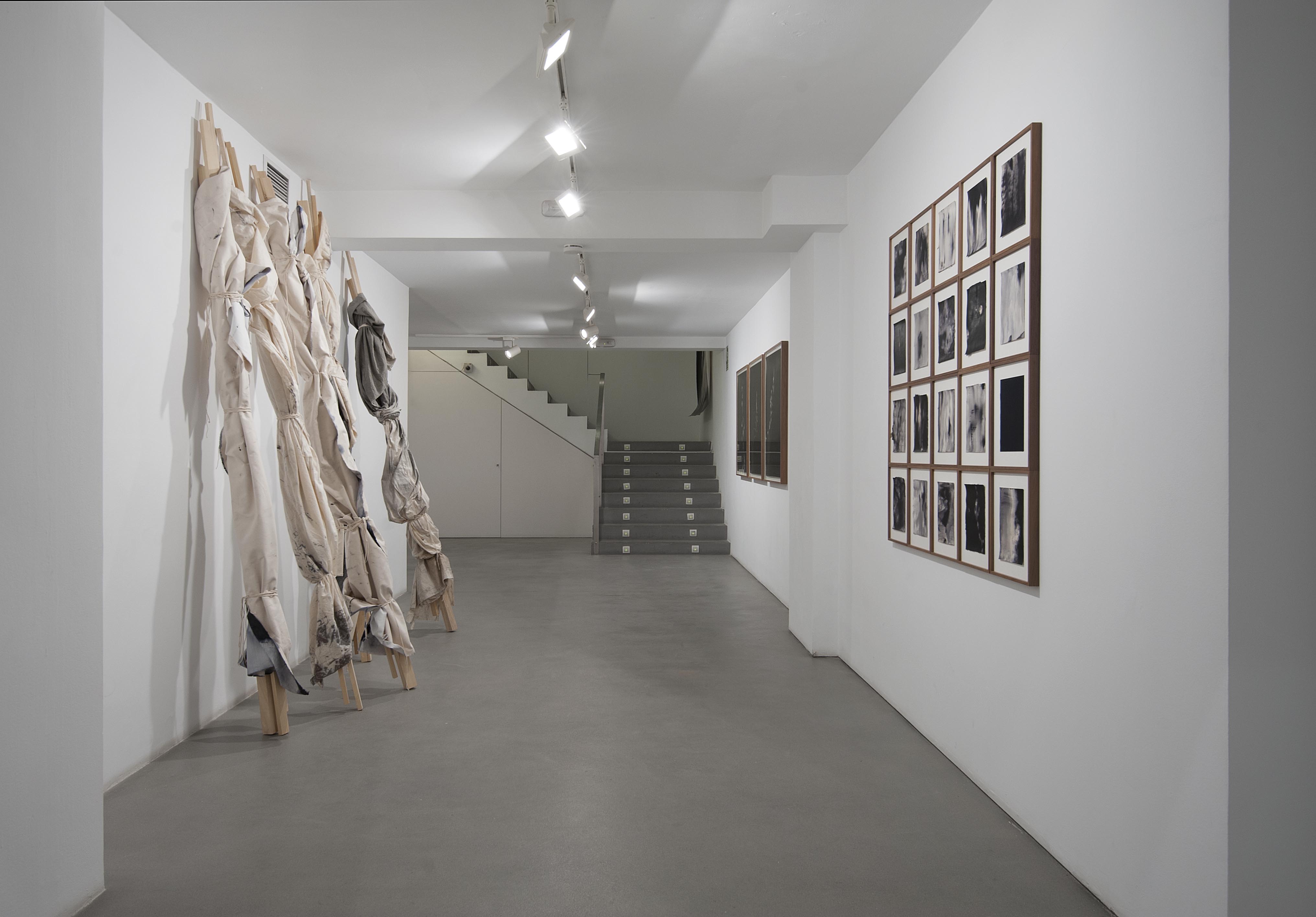 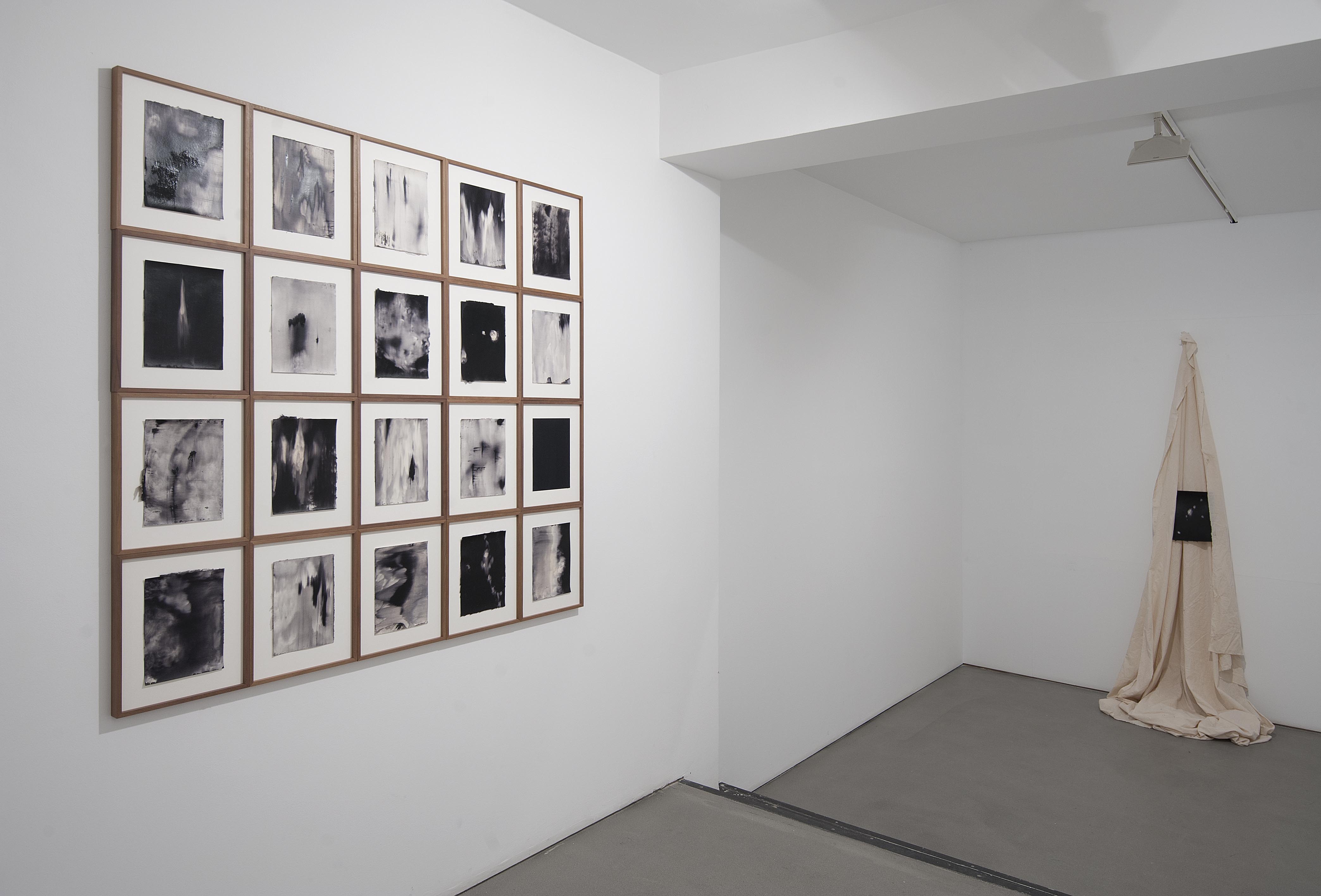 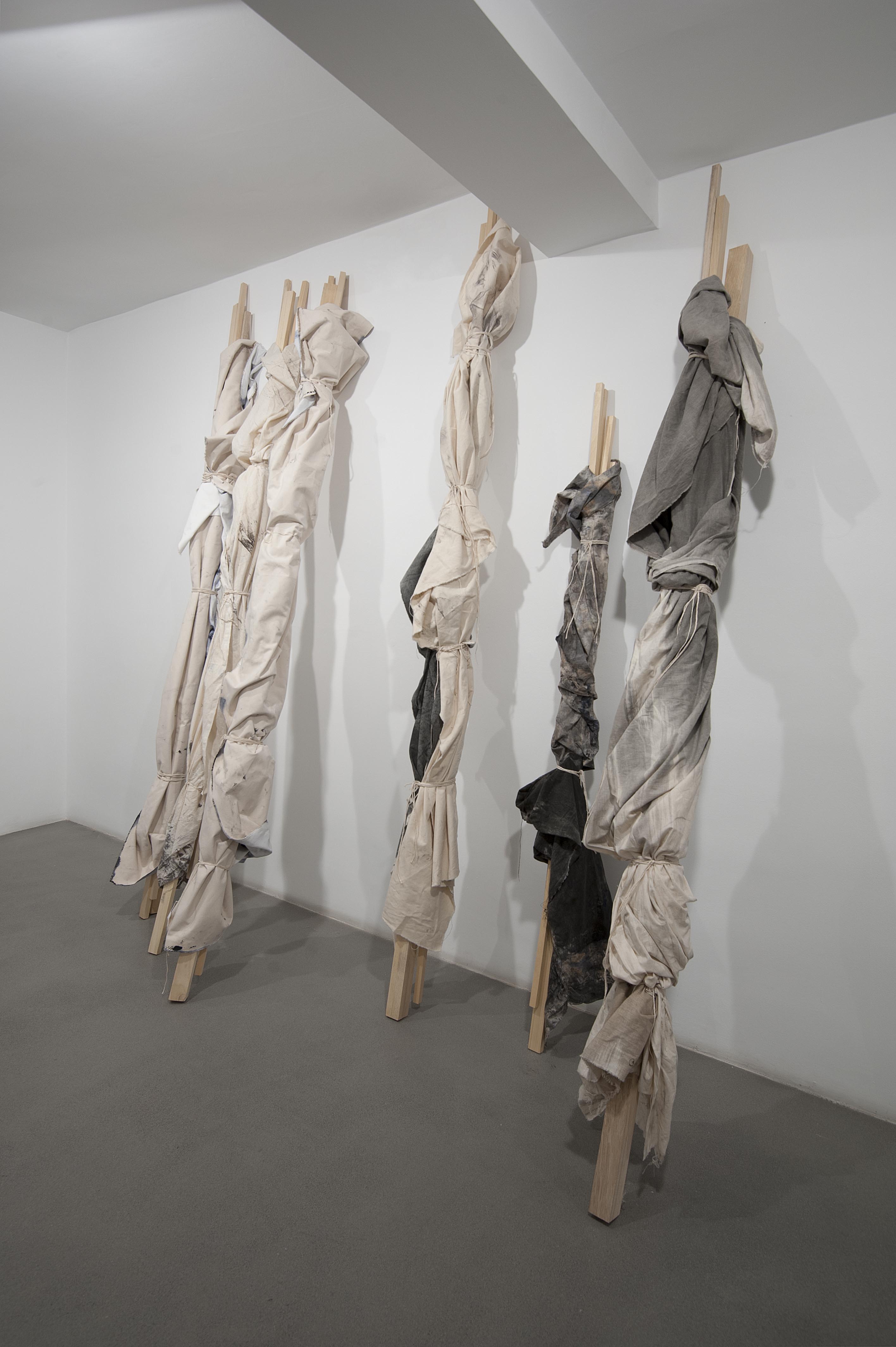 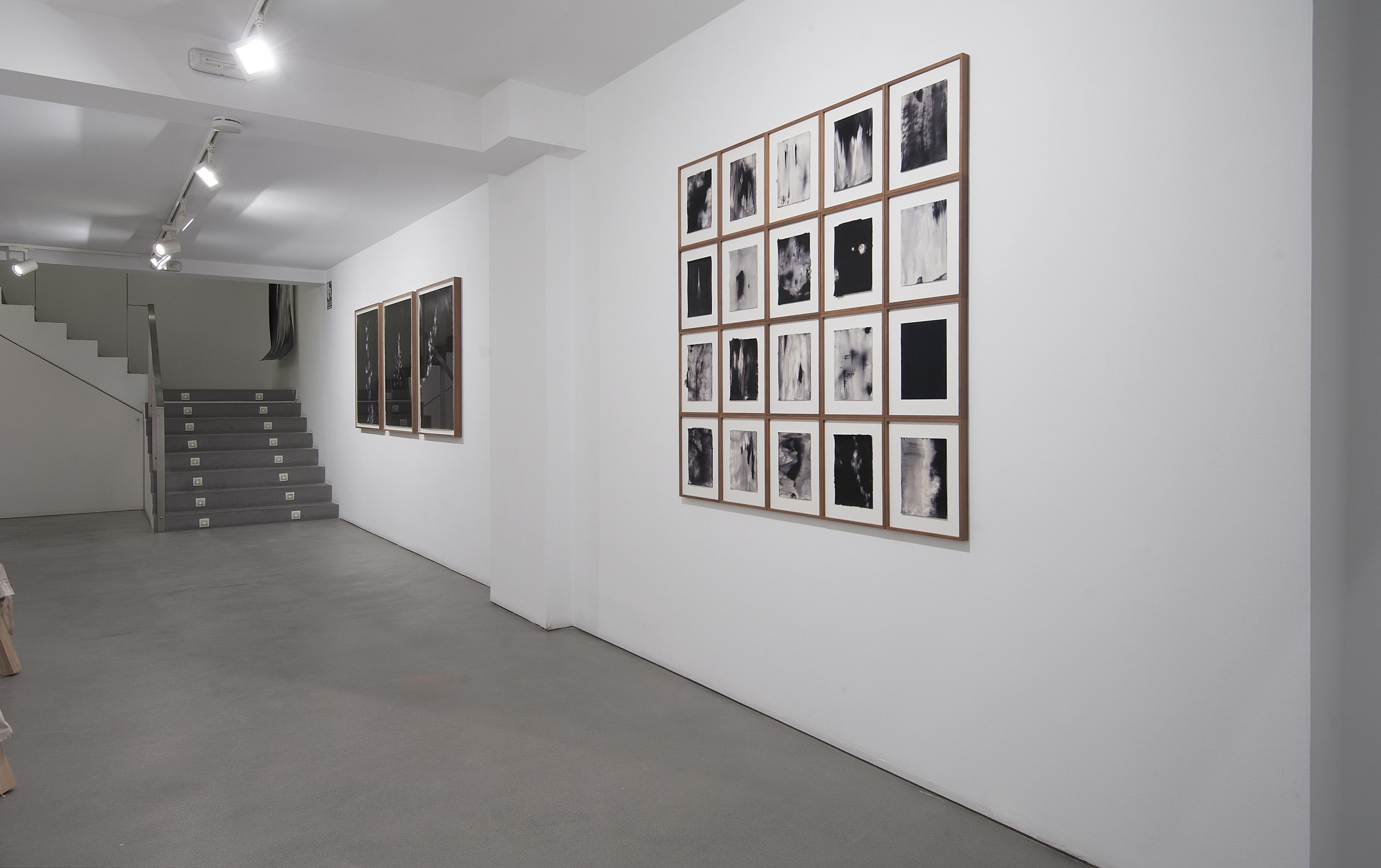 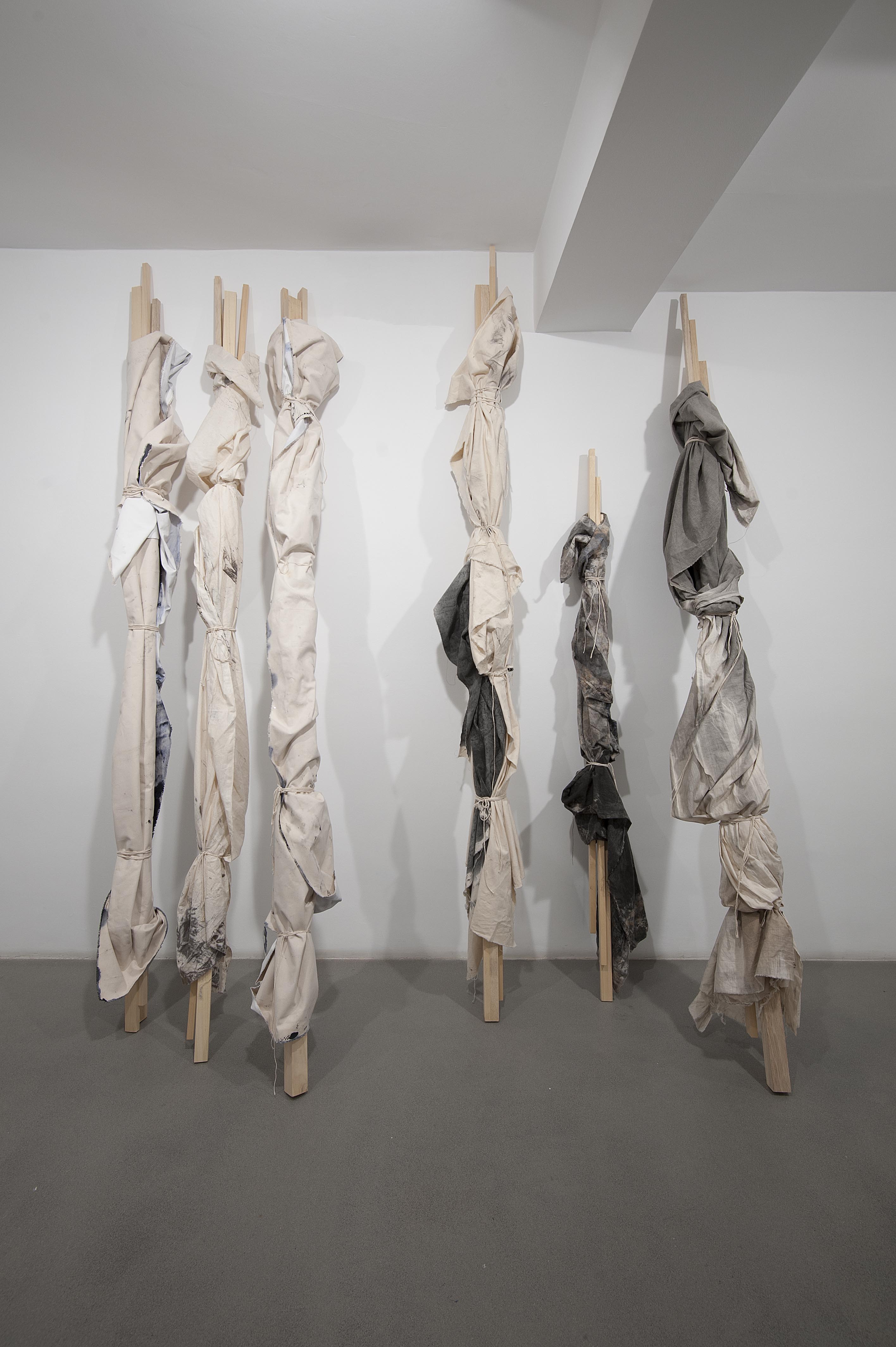 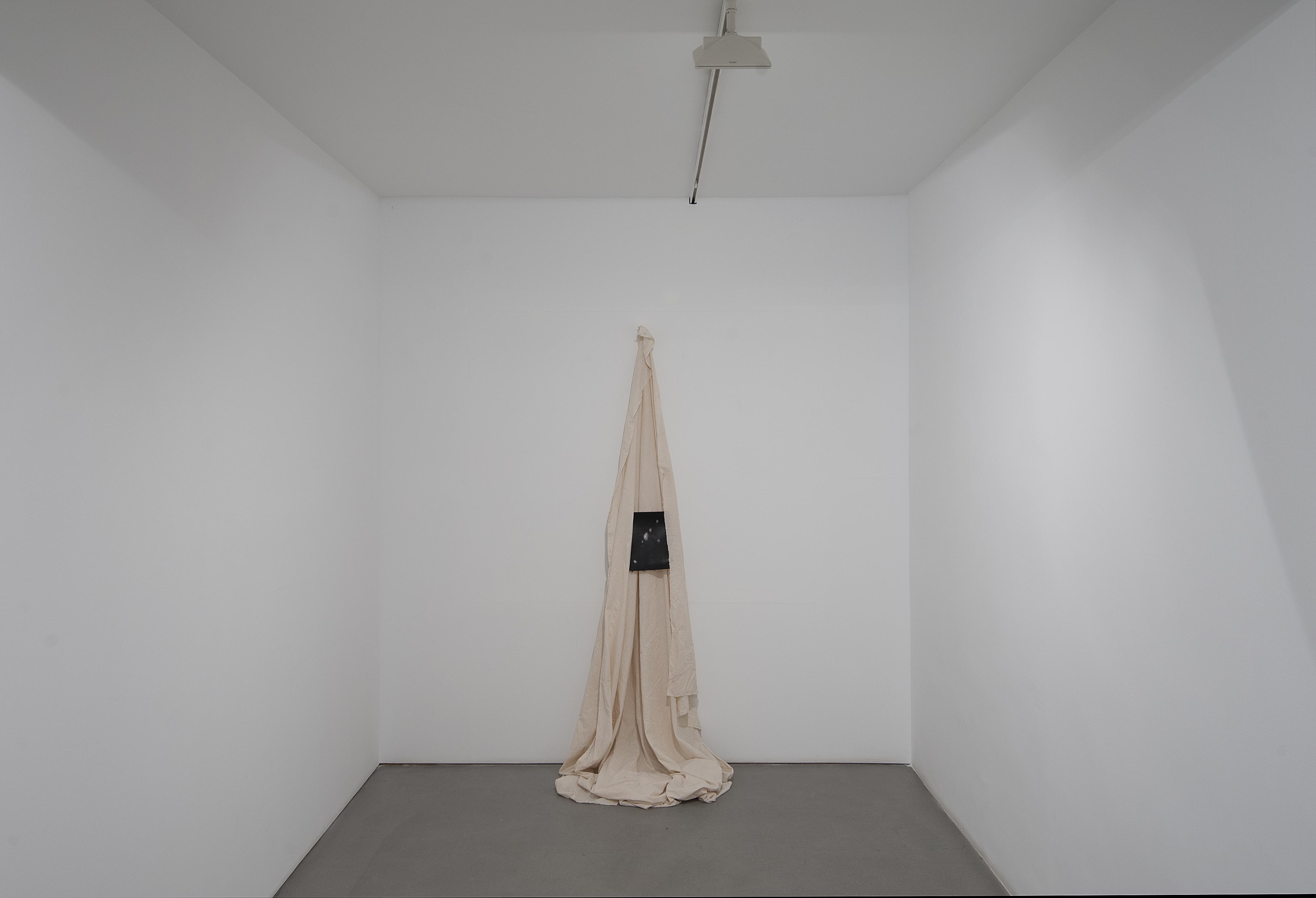 A rhythm for falling

“To be unhomed is not to be homeless, nor can the ‘unhomely’ be easily accommodated in that familiar division of social life into private and public spheres”

In The Location of Culture, Homi K. Bhabha

The work of Alexandra Karakashian, from up close and from afar, conveys a series of refined sensations that are both powerful and subtle. The initial perception is that the media and technique come together in pictorial works exhibiting great aesthetic purification, emerging from a reworked view of American abstract expressionism. However, the materials used by the artist (used engine oil and salt) have a meaning that goes beyond the simple contradiction between poor materials and noble materials so common in the history of painting. Their value is symbolic and deeply rooted in the current problems between North and South, such as environmental degradation, commoditisation and the essential elements for life. Both materials have been a source of conflict throughout history.

Solnitsata, the first prehistoric town in Europe, was built around the production of salt in the region. Salt, one of the essential elements required for life, was used as a currency and was also a symbol of wealth. This town, located in what is now Bulgaria, 50 kilometres from the coast of the Black Sea, is considered the oldest example of a European city.

Rather than having a conceptual perception, we are compelled to interiorise the works due to the feelings of disturbing tranquillity that they awaken. The opportunity to focus so closely on the vastness of these abstract landscapes and on their chromatic simplicity makes it so the feelings end up predominating over the conceptual justification of the works.

Painting is a tool that has the ability to nurture an intuitive relationship between the viewer and the work. This ability is especially evident here. Karakashian’s works are a journey exploring concepts like reminiscence, exile and exodus.

The artist unloads the symptoms of a sense of preoccupation about something that has not yet been experienced. Her family’s history arises as an essential note in her biography, explaining the extent to which the personal is political. Homi K. Bhabha’s notion of unhomed allows us to understand this concept as the sense of compulsive displacement from historic roots.[1]

The desire to examine intersections between ecology, transcendence, commoditisation and exile come from her personal history. In 1915, her grandfather, still a baby at the time, had to flee with his family from the Armenian Genocide and migrate. The family initially relocated in Romania and later headed south, first living in Egypt, before finally settling in Johannesburg, South Africa.

Painting has historically played a preponderant role in transmitting narratives of the self in the West. What happens when this narrative is not Western? It is at the meeting point between different epistemologies that we can think of renewed ways of looking at common concepts and give them new meanings that are not necessarily the negation of previous symbols, but rather end up creating a hybrid narrative that coexists in the area of contact between cultures.

Since 2009, Alexandra Karakashian’s work has been based on an almost scenic technique that involves displaying her used engine oil and salt paintings vertically on isolated canvases or emerging from vats of oil. The overwhelming beauty of her paintings results from how the oil randomly spreads over the canvas. An atmosphere of anticipation and solemnity is created by the use of black on a white background. The black and white blend together, defying gravity through capillary action, and the salt struggles in the face of the quickly advancing oil. The smell of oil permeates her works and fills the surrounding space.

There is something fundamental in Karakashian’s paintings, like a refined gesture that emerges from the artist’s body language. With a past connected to dance, this body language emerges naturally and eventually transcends the idea of figuration that her paintings negate; the dimensions of the paint strokes are, for the most part, in keeping with the dimensions of her body. And like the materials that the artist uses, her personal history is full of wealth and rebuff. Her work creates metaphors for intimate feelings of constriction, but also for the anticipation of becoming collectively unhomed (eco: oikos).