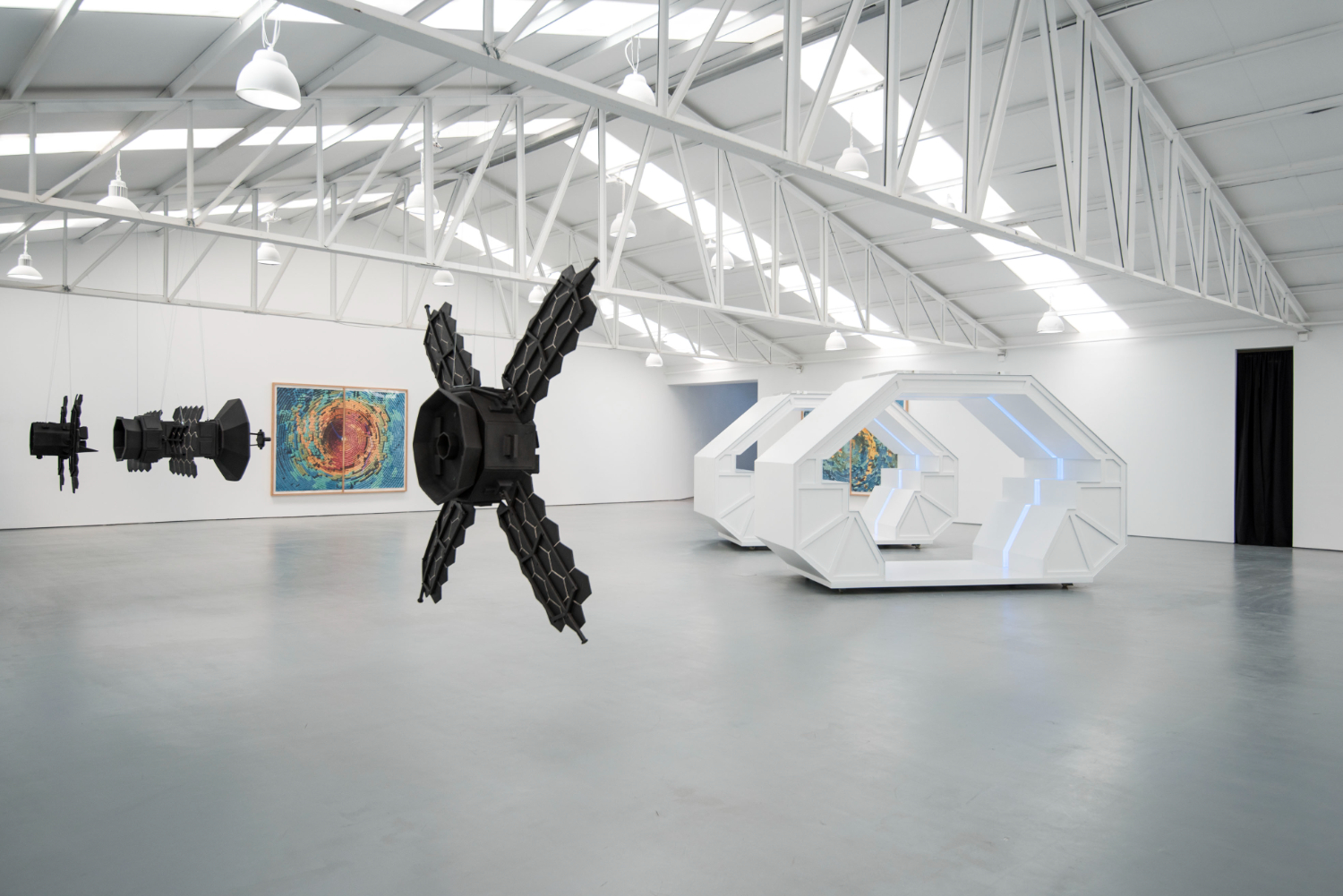 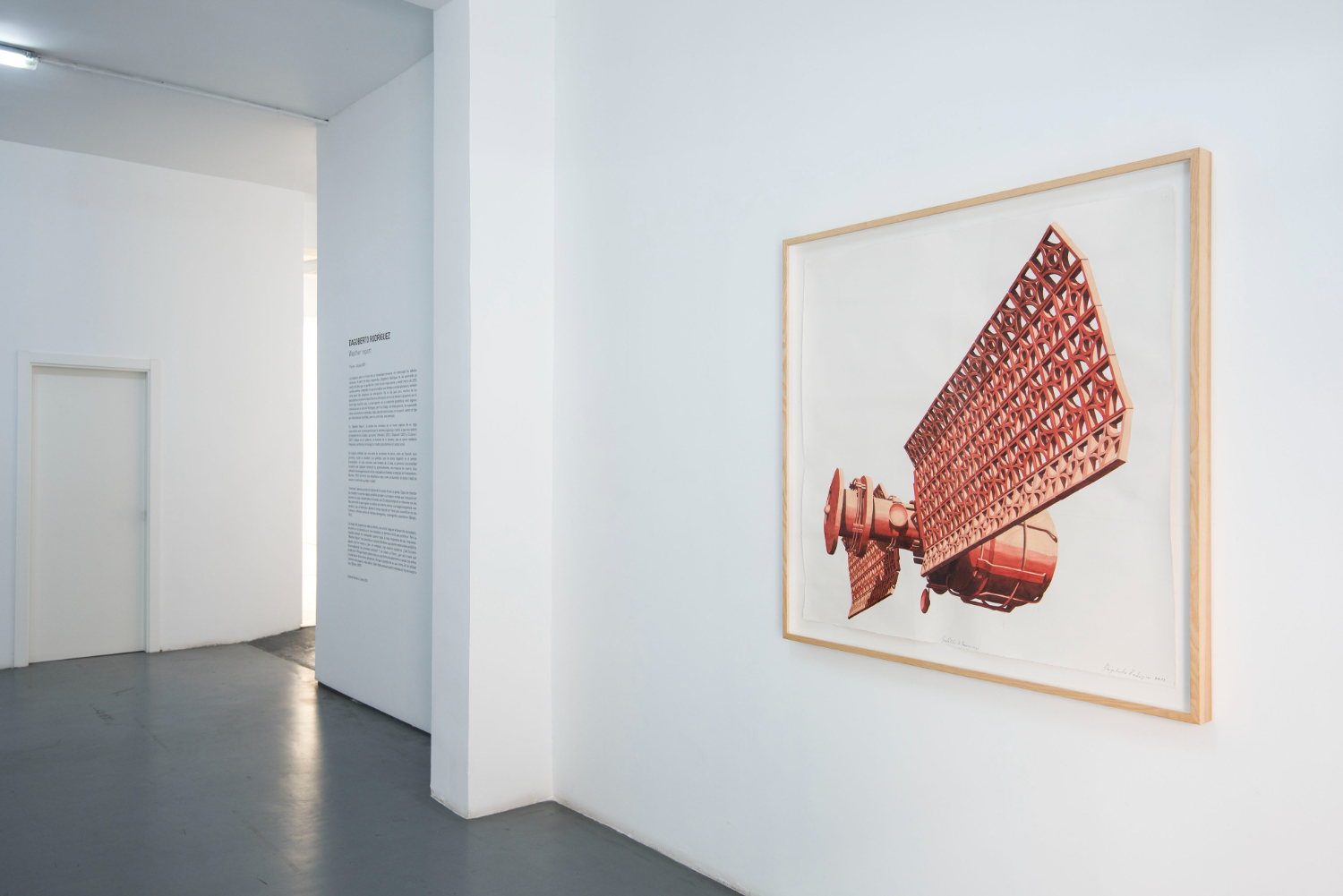 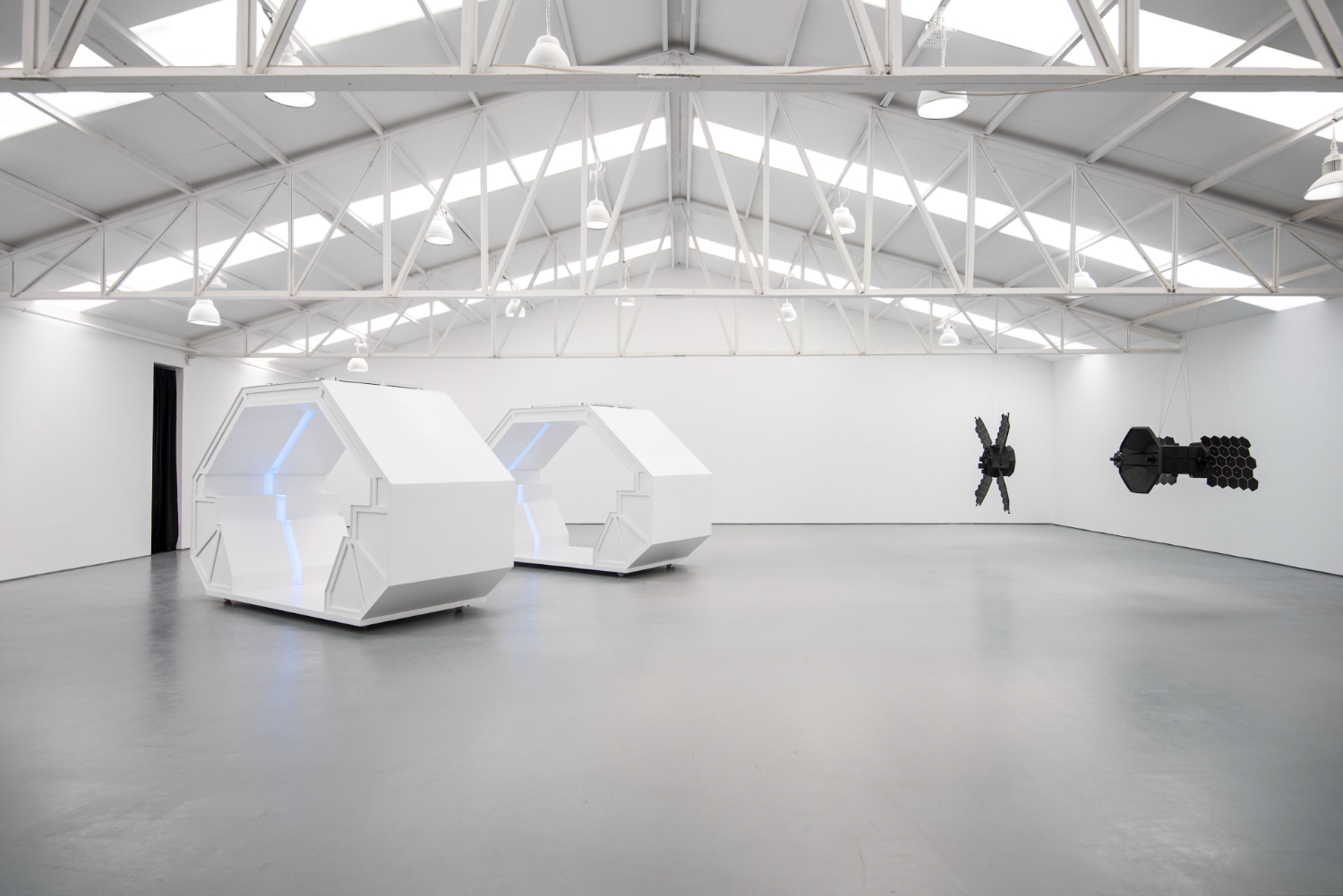 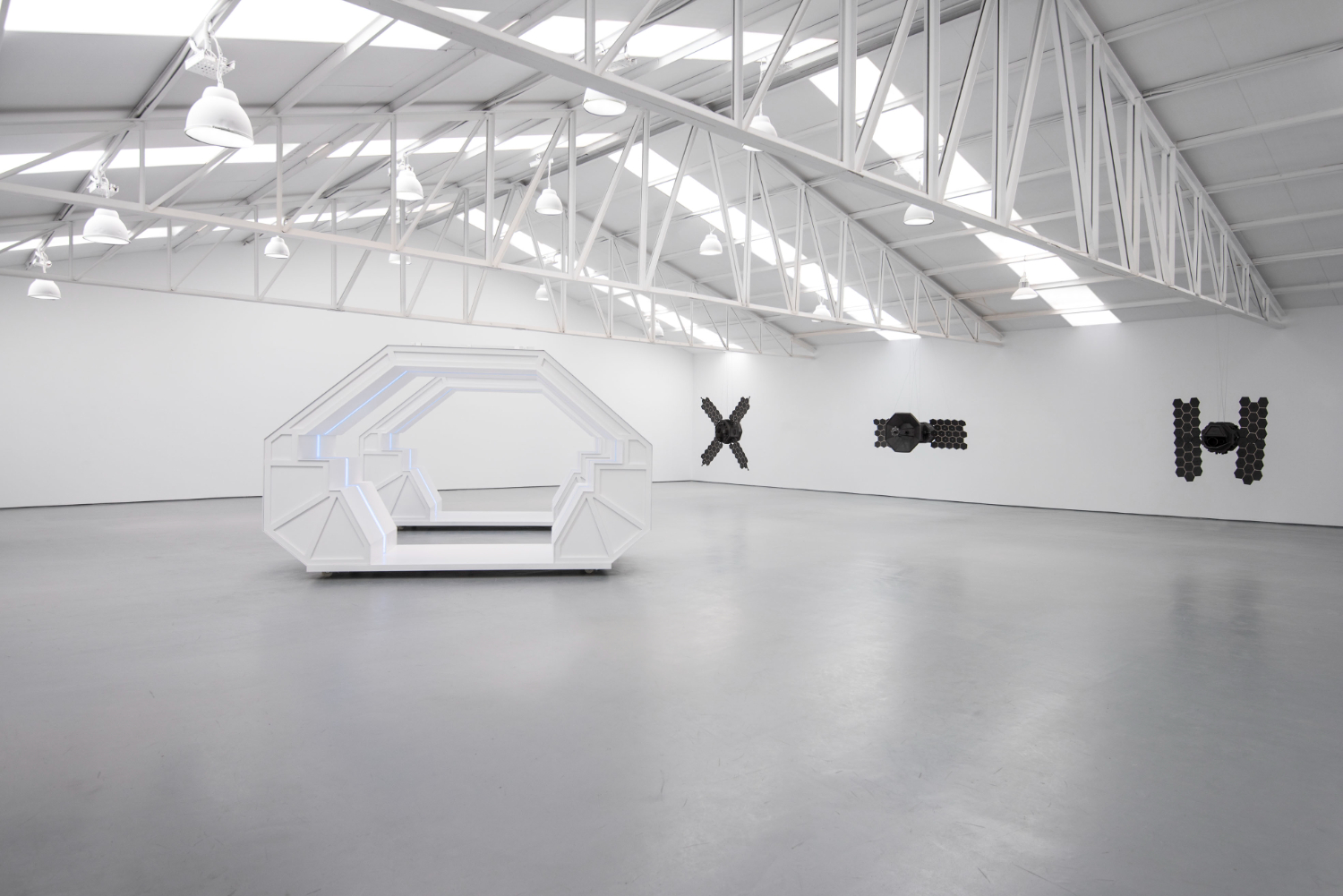 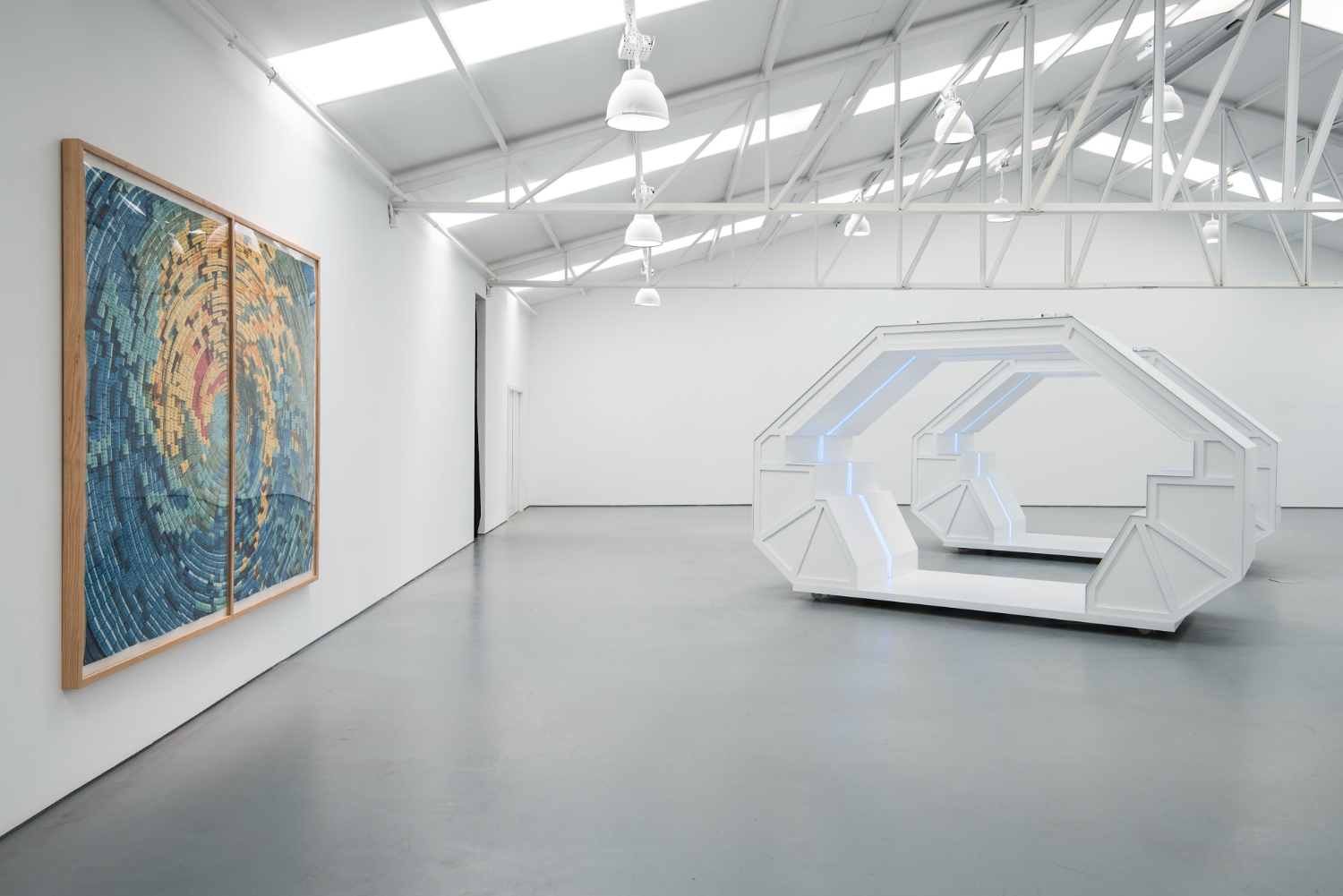 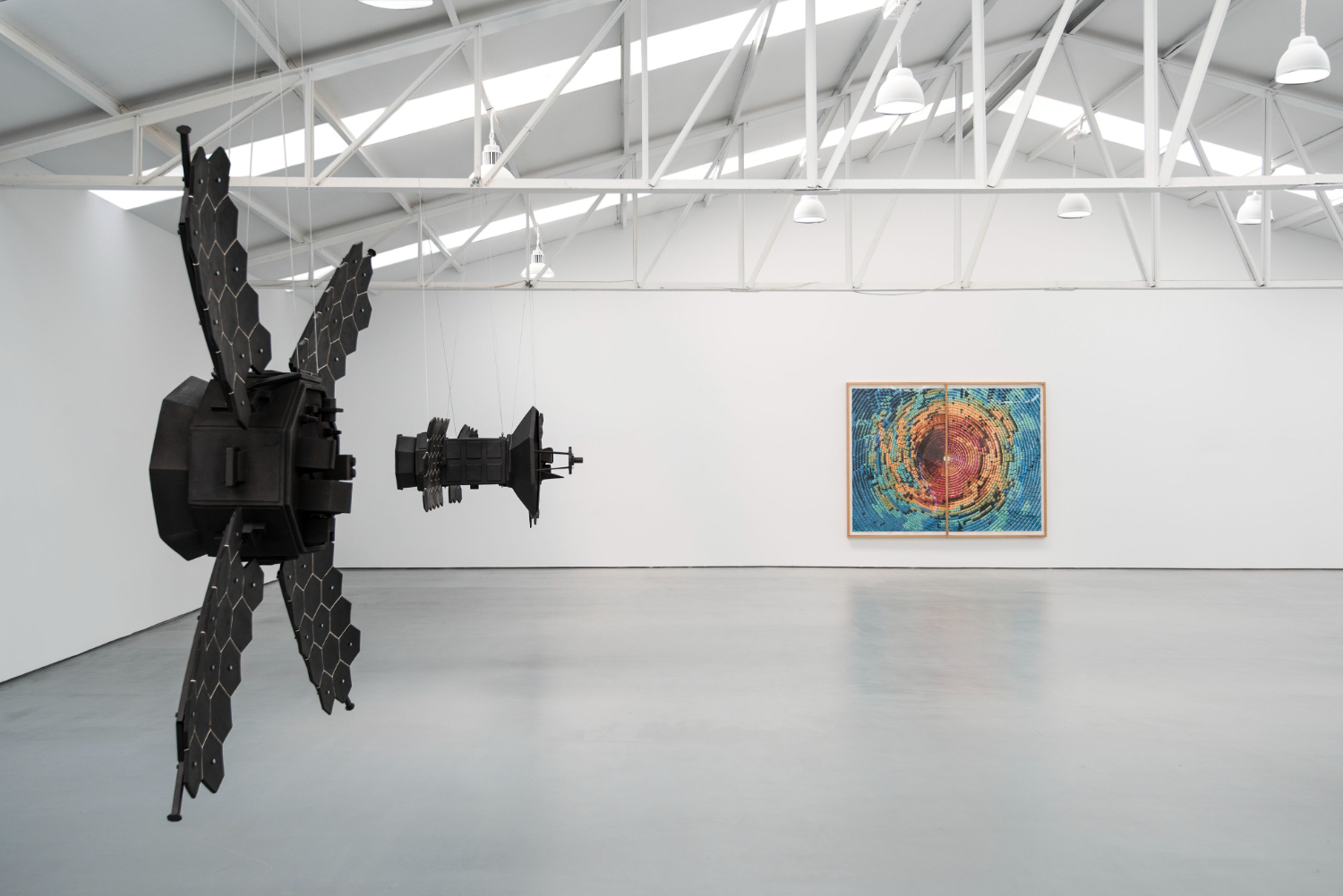 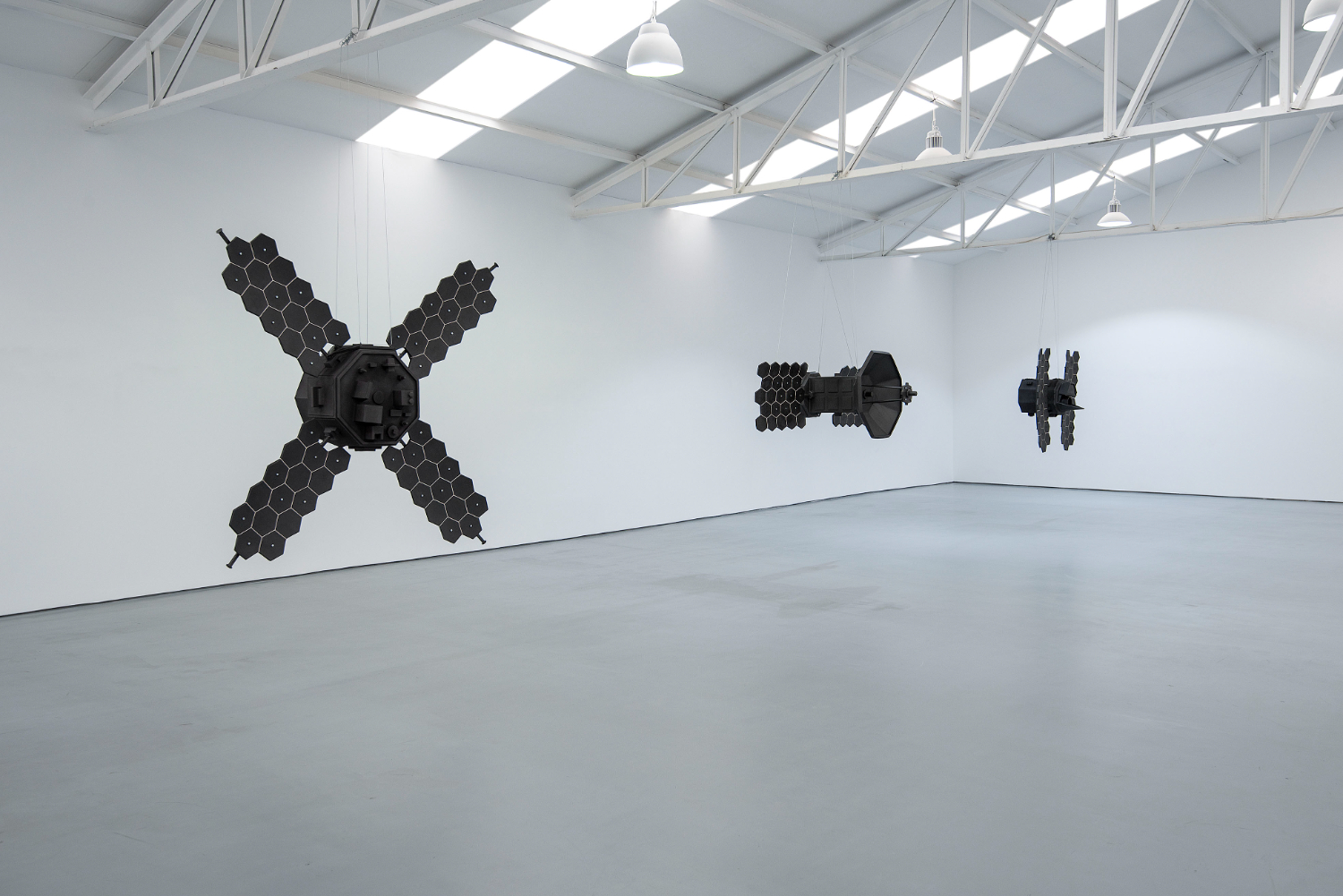 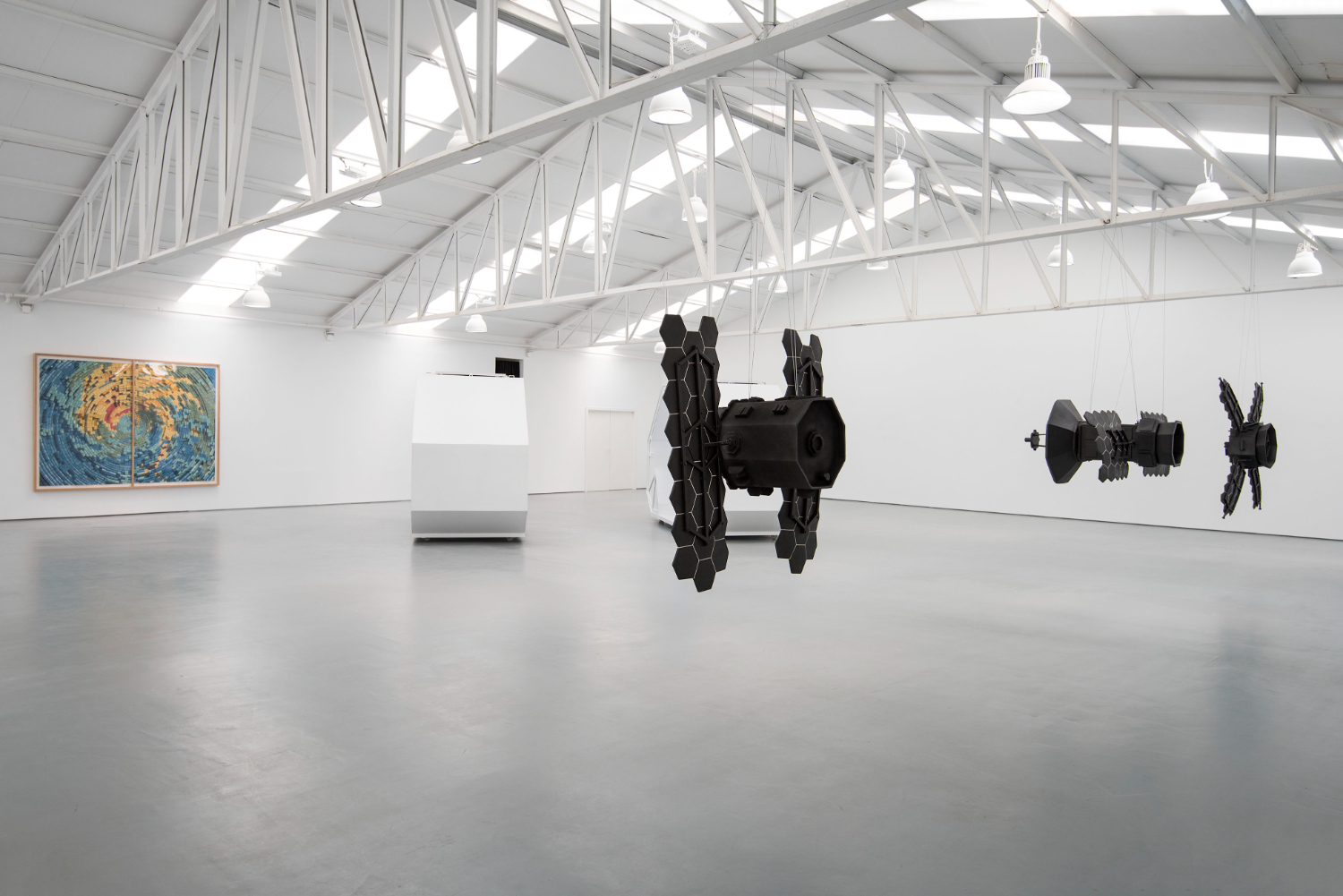 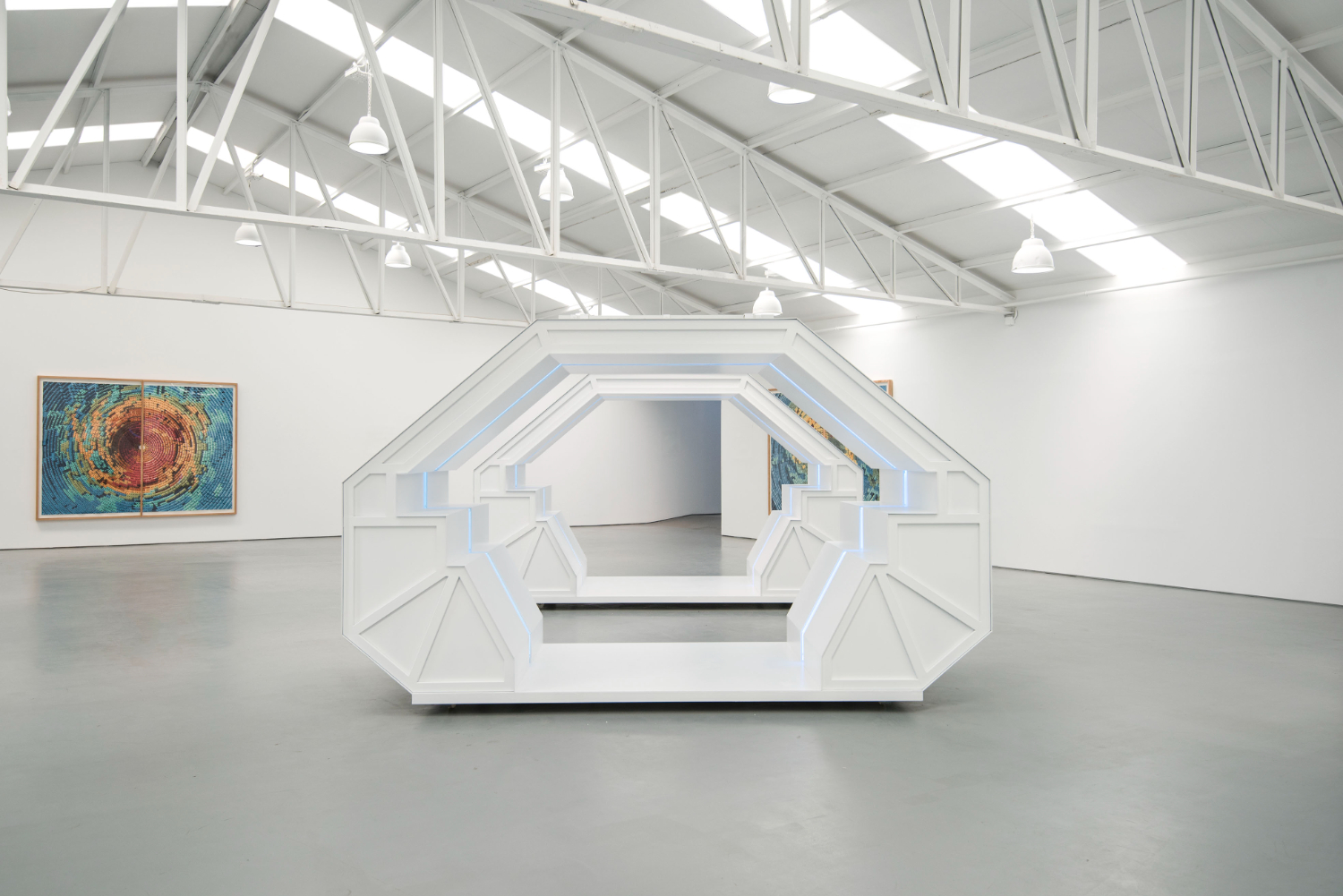 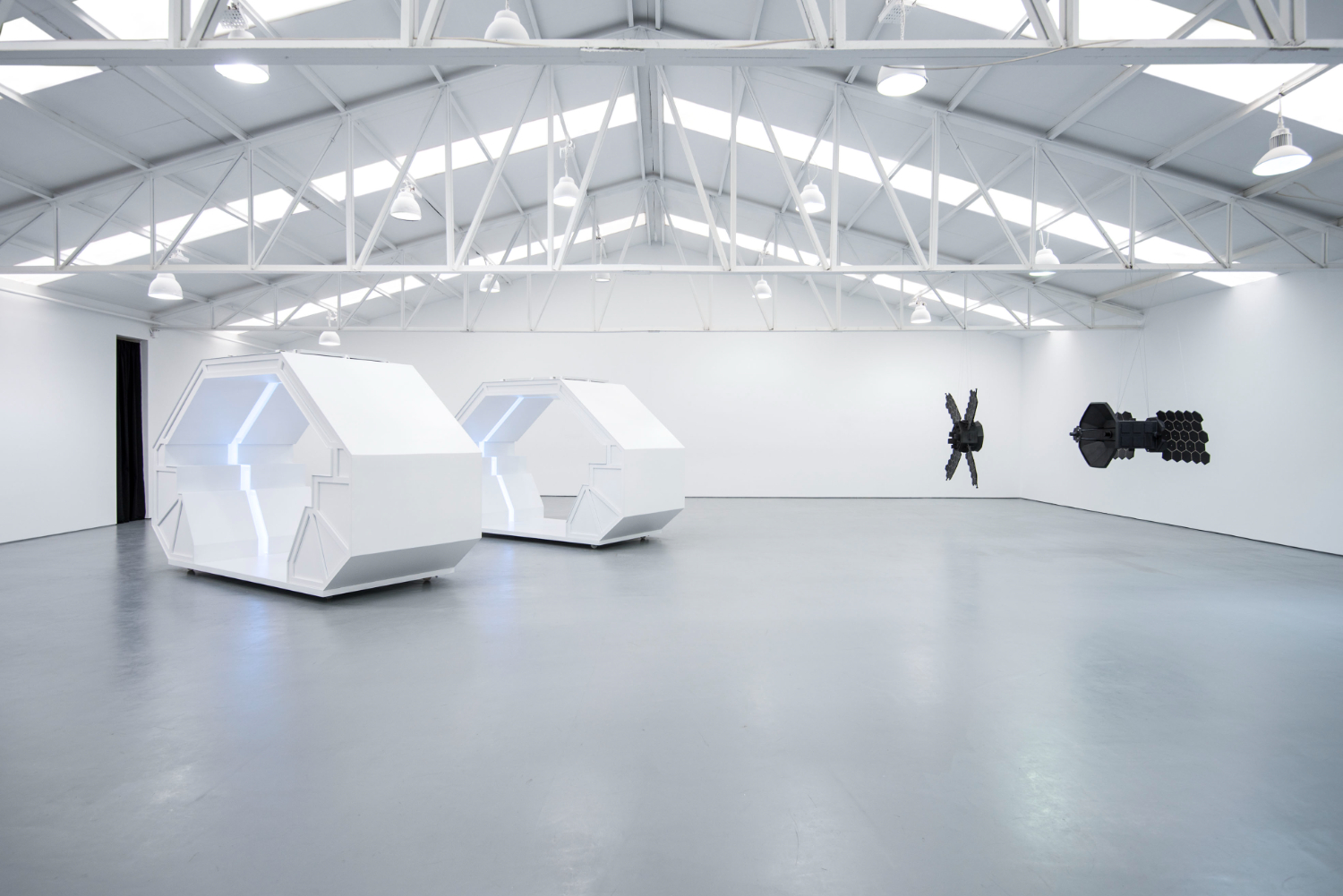 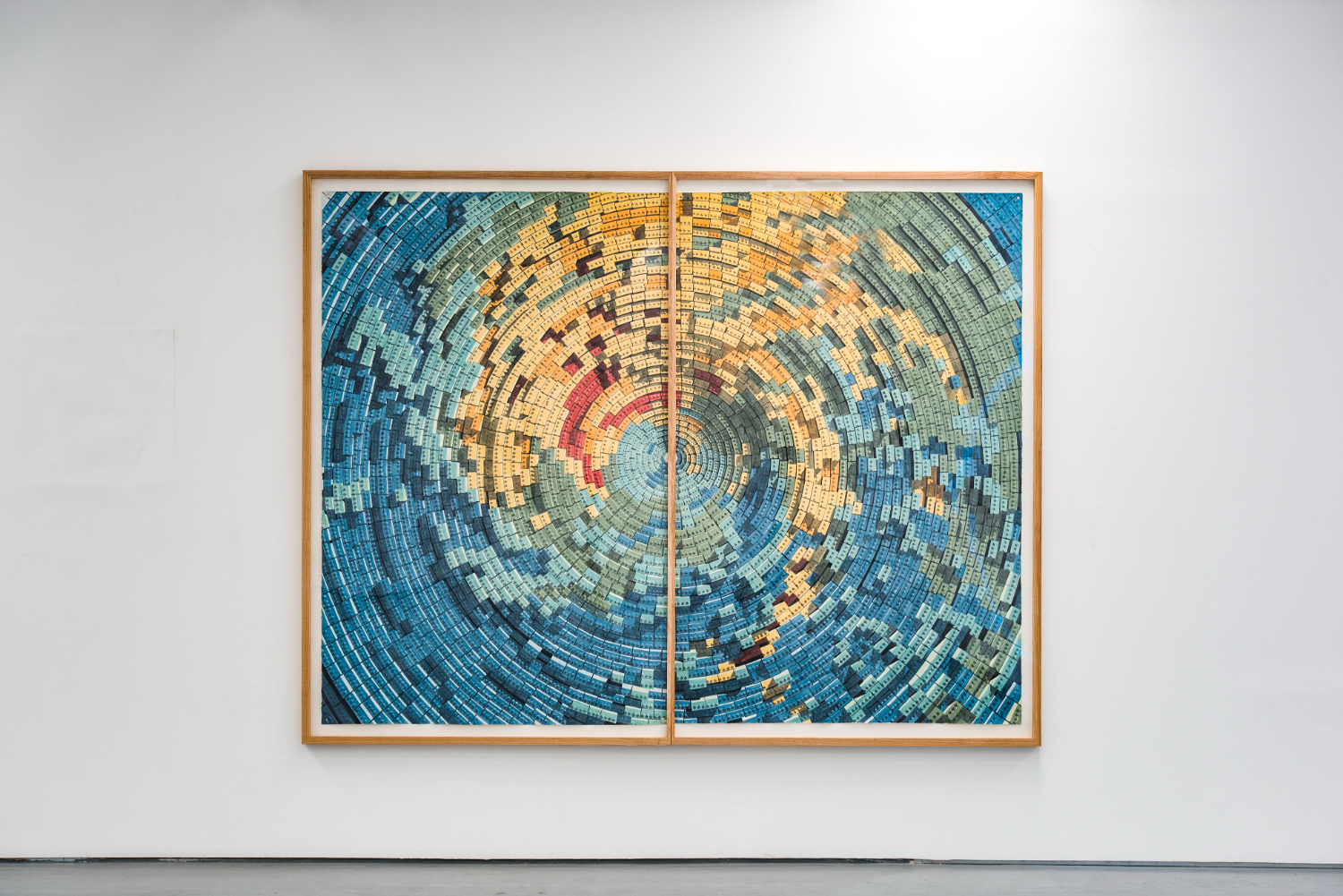 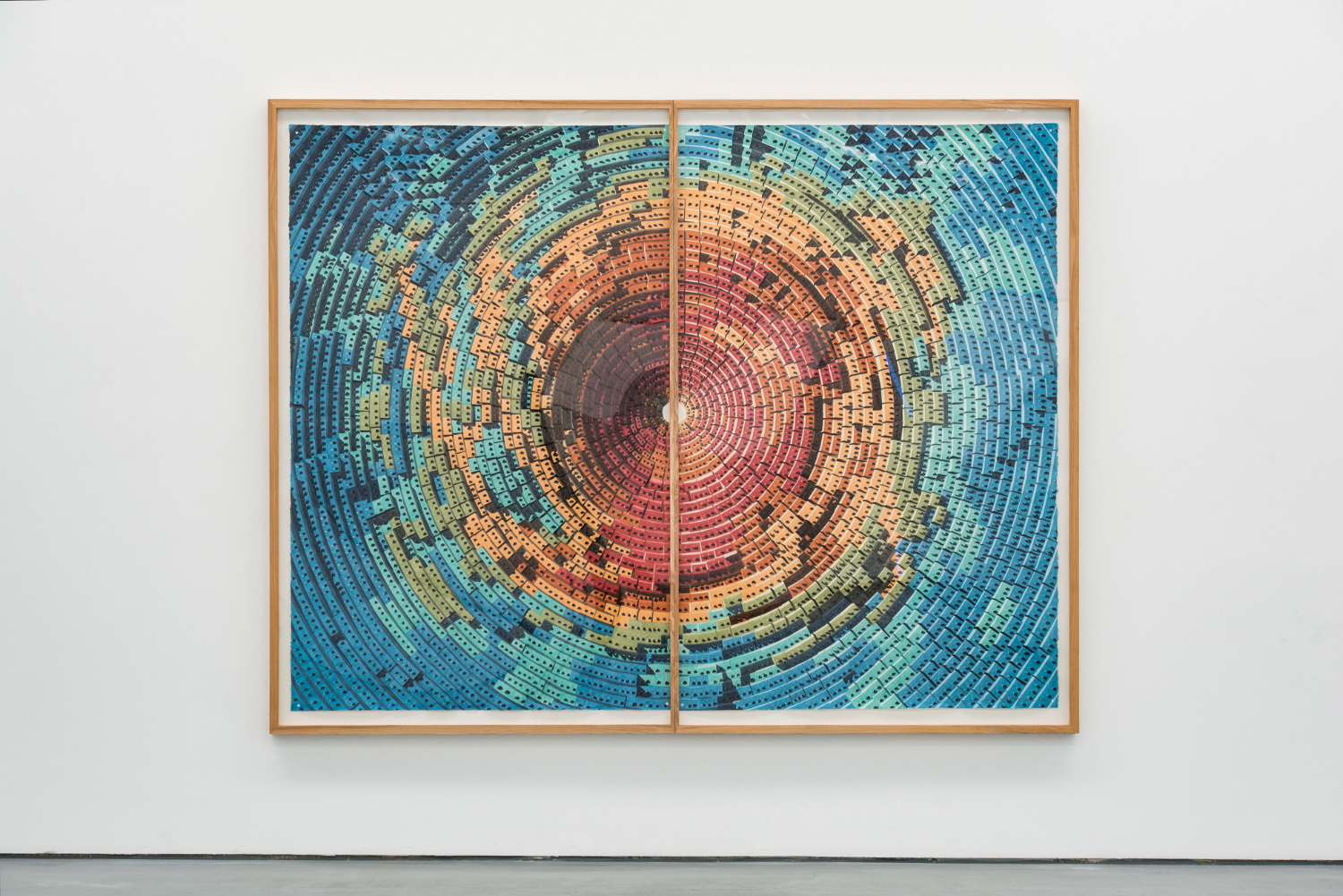 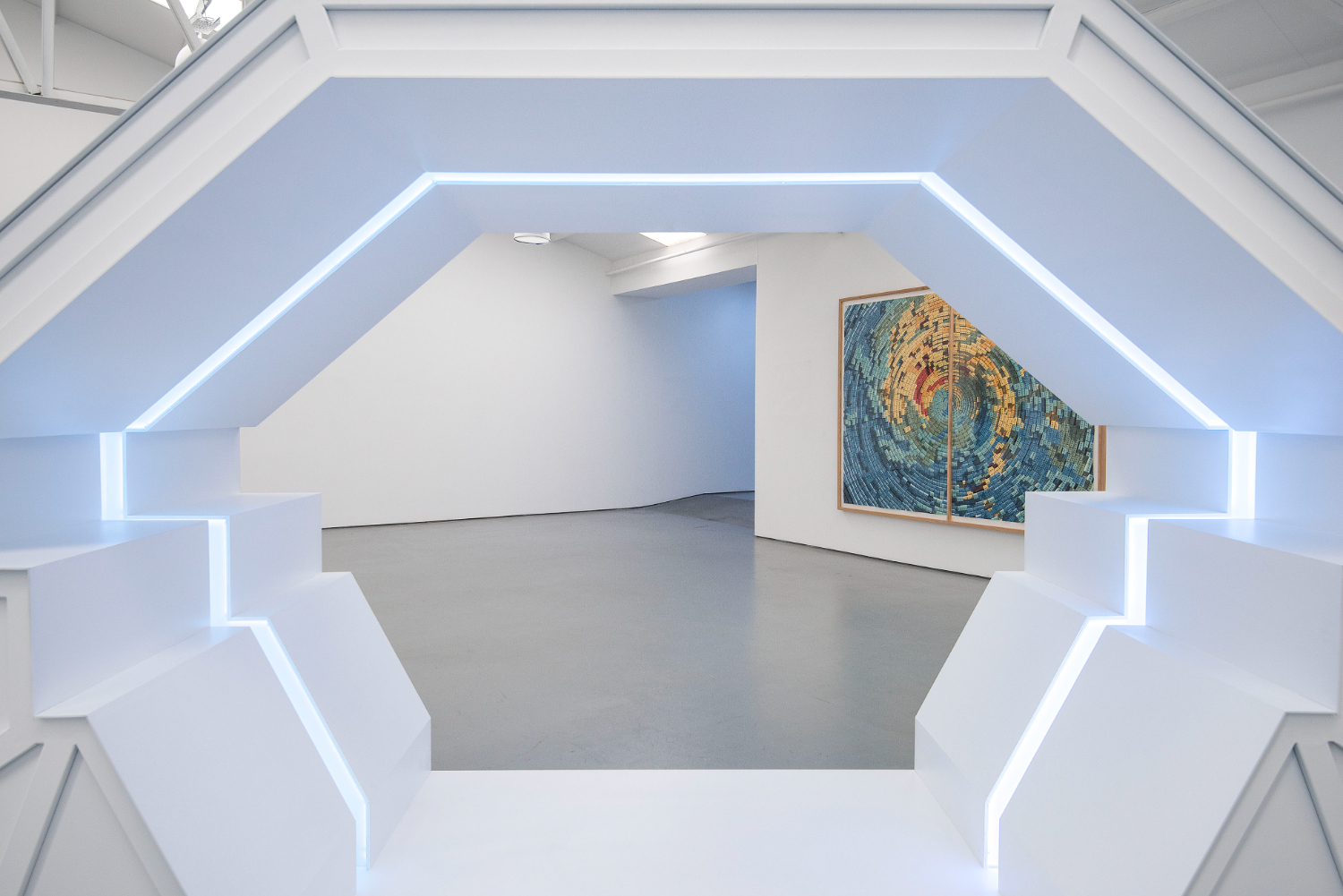 The question about the future has been going through cultural debates with intensity during the last two decades. Sharing some of these concerns, Dagoberto Rodríguez has been generating a body of work that can be read as speculative fiction and, since March 2020, when we were able to verify what it was like to inhabit a dystopia on a planetary scale, it can also be inscribed within the subgenre of anticipation. From one day to another, many of the apocalyptic scenarios described in fantastic literature and cinema became the ground under our feet. The anticipation of the pandemic catastrophe has clear references in Rodríguez's ouvre (Túneles, 2019; Geometría Popular, 2020) but his work, in general, has been speculating on an existence subject to all kinds of restrictions, which takes place within aseptic and constricted architectures, where the body is governed by hostile relations because it is, above all, a threat.

In Weather Report, the artist introduces us to a new chapter in this speculative saga in the face of concern about the extreme surveillance and control to which the biopower of the states subjects us. In particular, the series that he presents in this exhibition, Umbrales (2021), Dispositif (2021) and Ciclones (2021), investigate the non-human control of life, through machines and technological devices. With the exception of his videos, Rodríguez's pieces never include the human figure; his reflection neither directly address oppression nor does it represent the oppressed. Rather, his interest lies in objects and instruments created to exercise some kind of dominance over human existence.

The exhibition introduces us to a space orbited by a series of clay sculptures that hang from the ceiling, like a primitive Starlink train. Satellites - also planets - have been part of Dagoberto's visual repository since his youth. Probably, the complex Cuban context at the end of the twentieth century led him to fantasize about unknown territories beyond this galaxy, where he could escape the binary choreography that divided the world in those years.

However, the ambivalent functionality of satellite technology, so useful for finding the best route by car, as for directing a missile at a house, introduces here a techno-negativist reflection by the artist. Satellites –one of many dispositif in the Foucauldian sense– not only control every moment of life, their perverse functionality reminds us that any device is potentially a death machine. Thus, the so-called «Frankenstein complex» is updated (Asimov, 1947), the «Frankenstein complex» (Asimov, 1947), an almost archetypal fear that, like a boomerang, the created object turns against its own creator. Humanity at the mercy of its machines. Speculation or anticipation?

Regarding the weather report that gives title to the exhibition, it always offers a prediction, a preview of what tomorrow may be like. It announces if we will have intermittent showers, suffocating heat or if a hurricane of relative intensity will enter the continent from the north coast. However, despite the high technology used, weather predictions have not yet managed to avoid the effects of the destructive burst of natural disasters, increasingly intense due to climate change. In the Ciclones watercolor series, Rodríguez uses satellite images of the most devastating storms that crossed the Atlantic in recent years. Katrina (2005), Alex (2010), Dorian (2019) left more than two thousand dead, hundreds of thousands of victims and billions of dollars in material losses in the Northwest region of the United States, Central America and the Caribbean. As in previous works (Ánforas, 2019; Tweet, 2018), the artist addresses through his particular iconography the collective suffering of large population groups, unable to contain the tragedy, powerless in the face of the hecatomb of the tempest.

Umbrales considers another of the recurring topics in science fiction: the portal. Capable of connecting two worlds, the magic door -a tunnel, a mirror, a closet or a cave- makes it possible to pass through a space-time that runs parallel to what we consider to be the real world. In the German television series Dark (Netflix, 2017), it is a cave in the middle of a forest that allows a group of characters to cross the barrier of time to wander through what was, is and will be their own life apsnning generations. “The distinction between past, present and future is nothing more than an illusion. Yesterday, today and tomorrow are not consecutive, they are connected in a circle with no beginning or end”, says one of these travelers. The temporal threshold is related to another ancestral idea: the one suggested by the Uroborus and the eternal return or the Borgian image of "the paths that bifurcate", where time ceases to be linear to become a plot of "infinite series of divergent, convergent and parallel times”(Borges, 1941).  Umbrales suggests a prototype portal that allows us to transit into those other dimensions where, as many works of science fiction suggest, it is possible to find answers to the incongruity of the world we inhabit.

The utopia of the Western life project, with a blind faith in technological development, found in literature and fantastic cinema a fertile territory to proliferate. But reality has always managed to overcome even the most imaginative of creations. Weather report presents at Sabrina Amrani Gallery a set of works whose speculative breath amplifies what we do not see but, nevertheless, governs our existence. Power, supremacy, the force of nature or perhaps its anger, the extinction of life or its transformation. What fictions will trigger our next certainties? And as for the future, why predict it or what for? “Because making predictions is a form of warning when we find ourselves drifting in dangerous directions. Because prediction is a useful way of pointing out safer, wiser paths. Above all, because our tomorrow is the child of our today " (Butler, 2007).