Born in Seoul and raised primarily in Queens, New York, Timothy Hyunsoo Lee creates work that explores his identity as Korean-American and the cultural displacement he experienced during childhood. While studying neuroscience and biology at Wesleyan University, art became an outlet for Lee to process his anxieties and childhood traumas. Although he ultimately decided to pursue studio art, his years of scientific training heavily influenced his artistic language. This is illustrated by the DNA-like forms present in Lee’s watercolors, which are composed of what he refers to as “cells.”

Thibaut Poutrel discovered Timothy Hyunsoo Lee at ArtBo, the contemporary art fair in Bogotá. The artist showed a surprising work, made of copper and Korean cloth, which evoked a mountainous and nocturnal landscape, with rounded and dreamy shapes. The piece recalls the classical art of the Orient, in a resolutely contemporary composition and technique.

El Mundo: From Neuroscience to a Contemporary Artist 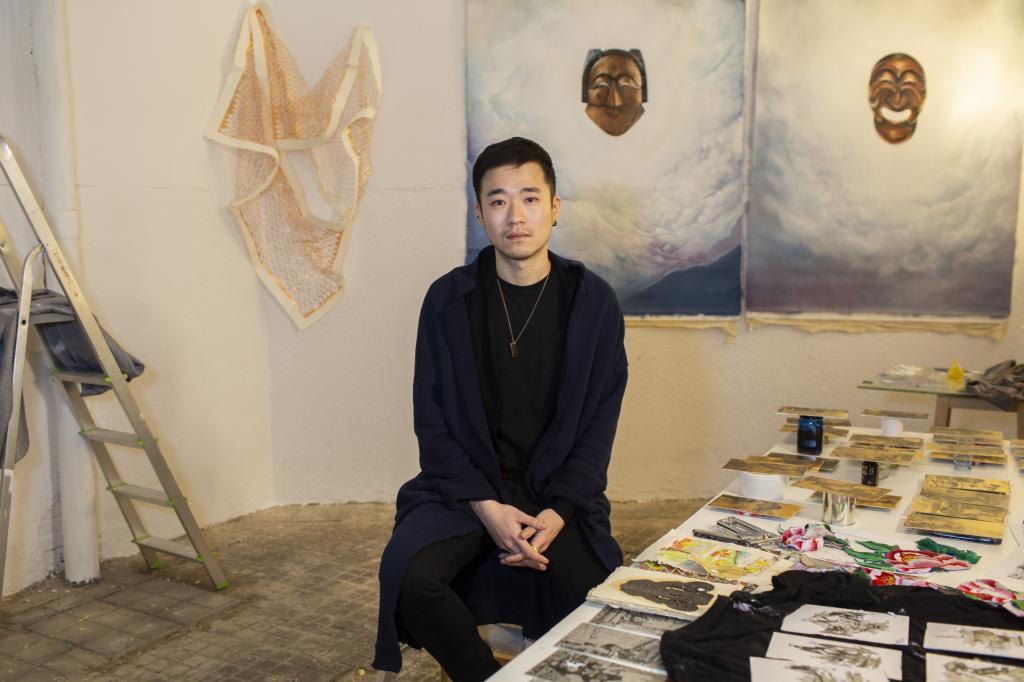 The personal and creative story of Timothy Hyunsoo Lee is so special that he could be a fictional character created by Paul Auster or Haruki Murakami. The newspaper El Mundo describes all those perceptions colected at Hyunsoo’s studio in Carabanchel, Madrid.

Magazine Art Dose interviews artist Timothy Hyunsoo Lee at the India Art Fair. How he started his career, the highlights of his art practice, materials he uses... Read all the interview by clicking the link below.

Interview with the artist Timothy Hyunsoo Lee, whose work is featured in a solo presentation at Sabrina Amrani Gallery at Art Stage Singapore 2015.

Gold-covered nails, neon signs, watercolor—the spectrum of materials that artist Timothy Hyunsoo Lee employs reflects the young artist’s fluency across mediums. In his new show at Madrid’s Sabrina Amrani Gallery, titled “No one dies alone,” and in a current presentation at the India Art Fair, the artist moves deftly between a range of media to address such timeless themes as death and the possibility of spiritual transcendence.

Timothy Hyunsoo Lee was in his final year of pre-med studies at Wesleyan University in 2012 when he realized his life’s work was in the studio rather than the clinic.

Artist Timothy Hyunsoo Lee doesn't want you to feel his pain. Through his work, however, he does want you to briefly engage in his reality.

What happens when we die? According to the book by the English philosopher Simon Critchley, Very Little… Almost Nothing. This feeling of nothingness that lurks over the human existence inspired Korean artist Timothy Hyunsoo Lee to create artworks for his No One Dies Alone exhibition.

Timothy Hyunsoo Lee is an korean-american artist based in Brooklyn. Inspired by themes of psychological disorders, spirituality and religion, his troubling sculptures mix several artistic techniques like realistic paintings, folding-paper and cut. To discover.