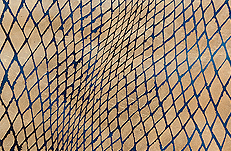 Timothy Hyunsoo Lee (born 1990, South Korea), is an emerging Korean-American artist working in Brooklyn, New  York, USA. His love for drawing began as a child, but his decision to pursue art professionally happened during his last year as a Biology, Drawing, and Neuroscience major at Wesleyan University (Middletown, CT). Drawn to the studio, and the creative process of making art, Timothy withdrew his ambitions of attending medical school and rented a studio in Williamsburg upon graduation, where he currently works.

Hyunsoo Lee’s works are inspired by themes of social stigma, identity, psychological disorders, and more recently, of spirituality and religion. He explores these themes through a novel vector – paintings and sculptures consisting largely of cell-like marks that vary in size, color, and saturation. His works are seen as ethereal and delicate, but the extremely labor-intensive compositions, marked by intensely obsessive repetitions, quickly betray that initial perception. Exploring his own history of anxiety disorders through his art, Timothy confronts and manipulates his tics and compulsions and channels them into his works. In responding to his anxiety with art, he has developed a novel system of mind-mapping – “a cartography of his psychopathology” – to study a part of himself that initially drew him to study developmental biology and neuroscience in college.

The artist works almost exclusively in watercolour and gouache, and prefers this medium over other paints and marking systems due to watercolor’s unstable nature. Mastering watercolor primarily involves understanding the pigment’s interaction with water, and the solution’s interaction with its surface, and every application of paint will result in a different mark. Thus, watercolor prevents him from “fussing” over trivial details in his works.

Timothy’s first solo exhibition, “Traces”, was exhibited at Wook & Lattuada Gallery, New York, USA, in 2013. Since then, he has also exhibited regionally at the Scholastic Inc. Store in SoHo, 2013; at Hundred Forsyth Gallery in the LES, 2013, and internationally at York St. Mary’s in York, UK, 2013; and at the Pink Art Fair in Seoul, South Korea, 2014. He been honored by organizations such as the Aesthetica Art Prize, The Alliance for Young Artists & Writers, and the National YoungArts Foundation. Timothy was the 2014 recipient of the VSA Emerging Young Artist Award given by the Kennedy Center (Washington DC, USA), as well as the International Emerging Artist Award in Dubai.

2017     Artist-in-Residence. The Basu Foundation for the Arts. Kolkata, India