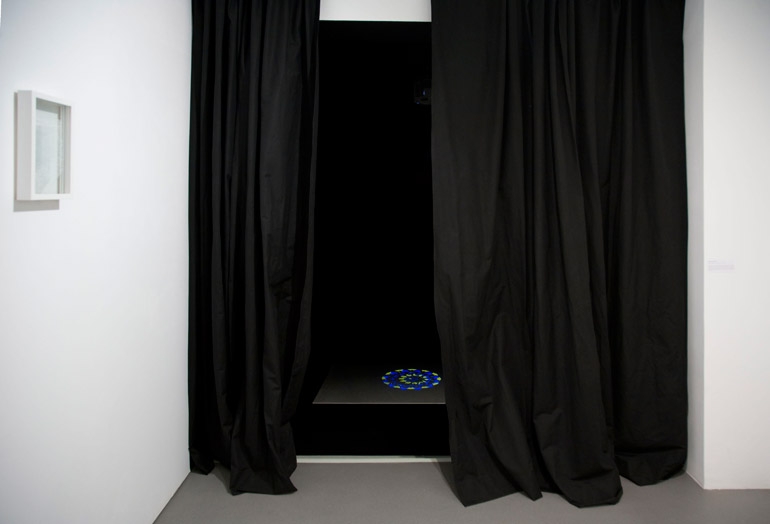 In the exhibition ‘Paraître’ Nicene Kossentini examines contemporary Tunisian society after the revolution. Among the ideological and political conflicts, the issue of identity emerges in a search for a new social model, and the social reference points diverge and divide between religion and modernity, freedom and conservatism. The presented artworks explore the confusion and disorder of identity by juxtaposing opposing dualities with origin in the theme of religion, generations or culture and heritage. The show is composed of video installation, ink works, photographic installation and sound.

The exhibition opens with a series of works titled 'Shakl', which in Arabic means both “motion” and “shape”. It is a series of glass panels on which it is written with ink the diacritics of ancient texts of Arabic philosophy that are projected onto a white cloth. The letters are not copied. Their absence empty the text of its body and its senses. Graphic signs drawn on the glass panels and their shadows floating behind, over the white canvas, can be perceived in this work as muted movements where rhythm is repeated until madness without finding the meeting point and the meaning.

The video installation 'Heaven or Hell' is inspired by the experimental film 'Anemic Cinema' that Marcel Duchamp made in 1926. It is an ornamental abstraction whose rotation alternates rotatory discs and extracted words from the Koran, which are written in spiral. This universe created of forms that decompose and come away from the center, and the words separated from their context, stripped of their true meaning, appear in a soundscape that evokes the sound of army footsteps running or the applause of a crowd. Is the metaphor or image of an "Arab Spring", that oscillates from the bright colors of the roots and the saturated sounds of the horizons. The video shows the anxieties and concerns buried in the collective unconscious versus an ongoing cultural loss and a present that dislocates.

The show continues with the piece ‘Schize’, a video that further penetrates the theme of the exhibition. The political, religious and social censorships generate a kind of inscision and disjunction in the body as well as in the soul. The oppression and the deprivation of the body's liberty (by covering it) and of the soul (by preventing its expression), are acts of domination and control. In the video ‘Schize’, legs, hands and hair.... are unfeld and exhibited behind a white screen hiding the rest of the body. In this Video, the artist tries to track down, by the outburst of the body movement facing censorship, the power and the invisible force of the fragile beings.

Other pieces presented in ‘Paraître’ are the photographic series ‘They abused her by saying...’ that evoke the fragility of human beings, the transience of things and the sweet melancholy of passing time and ‘Rasaîl’, a series of pieces inspired also by ancient islamic texts.